Celtics 124, Magic 97: Jaylen Brown, C's picks up where they left off after week long hiatus 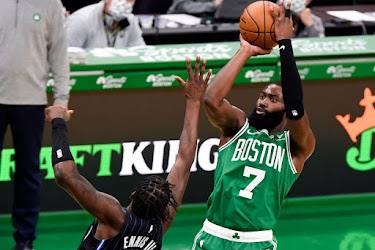 On Friday night, it seemed like the Celtics would just have the eight required players in their first game after a week off due to COVID health and safety protocols.
Just before tip-off coach Brad Stevens was informed that Jaylen Brown would return, along with Semi Ojeleye, Javonte Green and Daniel Theis into the lineup -- to lift the Celtics to a 124-97 blowout victory over the Orlando Magic at TD Garden.
Brown finished with a game-high 21 points, eight assists and Ojeleye scored 18 points off the bench. Rookie Payton Pritchard added 16 points (4-of-8 from 3), while the starting backcourt of Jeff Teague (17) and Marcus Smart (14) combined for 31 points.
Boston returned to the court after having their previous three-games postponed due to Jayson Tatum and Robert Williams III testing positive for the coronavirus, while others were in league health and safety protocol for contact tracing. But the team didn't seem to miss a beat in route to their fifth straight win and the Eastern Conference's best record at 8-3.

"It felt good. Obviously this COVID and this pandemic has affected not just us but every team in this league. Everyone is doing the best they can to cope with it and handle it," said Marcus Smart in his postgame presser. "They way that we played, with the pace and everything, that was key for us.

Aaron Gordon scored 17 points to lead the Magic, while Nikola Vucevic, Dwayne Bacon and Cole Anthony each added 15 points respectively. Orlando, now 6-6 on the season, lost their fourth straight on a night where they committed 13 turnovers that led to 16 points for the Celtics.
Boston shot 51.1% percent from the field and 40.5% from behind the arc to lead by as many as 29 points. After taking an 88-72 advantage into the final frame, the Celtics used a 13-0 run to put the game out of reach for Orlando.
All 12 available players for the Celtics would score including Green (10) and Tacko Fall, who nearly banked his first 3-pointer of his NBA career -- before it was waived off -- scored six points in eight minutes of action. Boston's second unit outscored the Magic's bench 66-33.

"I thought, obviously, in one way our first wind would hit us pretty hard. But I also thought there's the fresh advantage," Stevens said. "We were able to do that without anyone playing 28 minutes, which was good."

The Celtics host the New York Knicks (5-8) in a Sunday afternoon matinée, tip off is at 1 pm ET on NBATV.

Game Notes:
Boston held the Magic to 40.4% shooting from the field and just 25% from 3, while handing out 25 assists on 45 made basket on the other end. The Celtics finished with 51 total rebounds, as Tristan Thompson (11), Theis (10), Ojeleye (6) and Fall (5) grabbed the majority of those boards.
Joel Pavón
Follow @Joe1_CSP