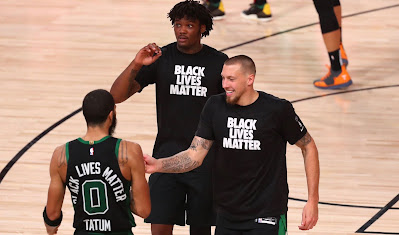 Robert Williams III returned to practice on Tuesday after testing positive for COVID and being out the past 10 days.
The Celtics big man will travel with the team to Philadelphia, bringing the total available players for coach Brad Stevens to 14 when they face the 76ers on Wednesday night.
Williams spoke about his family, including his mother testing positive for the coronavirus just days before his test came back with the same result.

"My daughter's mother and my daughter tested positive for COVID," Williams said his first team practice in nearly two weeks. "So my focus wasn't really on myself at the moment."

Despite everyone getting over the virus and his daughter never showing any symptoms, Williams recalls what he went through during his time at home.

"I woke up in sweats," Williams said, describing his symptoms that kept him bed-written  early on. "One night, I'm going through not being able to sleep, every five seconds I'm pulling the cover off me and putting it back on me. It was kind of tough."

Williams tested positive upon returning from Miami on the Celtics last road trip and before today, he hadn't done any basketball related activities.

"At first it was just strictly they didn't want me to do anything," he said. "Just keep drinking fluids, keep trying to eat. And as the days progressed, I got strength back, when I felt like I could move around and do stuff I did a couple of stretches at home, just trying to stay on top of my conditioning, staying strong a little bit. But for the most part it was just downtime, man."

While his teammates kept checking in with him while he was ill, Williams is happy to be back in the fold. He's especially glad to find out he hadn't developed myocarditis, which is an inflammation of the heart following a Monday morning cardiac test and he's been cleared to play in the Celtics two-game mini-series in Philadelphia.

"Really just happy to be back out here with my guys. The test, it had me down a little bit," said Williams, who could have some lingering cardiovascular effects. "(It) was a difficult time for me, I'm not going to lie. It's all I know. So it took a toll on me. But, like I said, I'm just happy to be back."

Jayson Tatum and Carsen Edwards remain out and in the COVID protocol, the last Celtics players — along with Romeo Langford (wrist) to not participate in practice. Stevens however, did not rule Tatum out for Friday's back end of the two-game set against the Sixers, despite obviously not traveling with the team.
The 76ers have a few players out due to contact tracing, except for Joel Emiid who was out due to an injury. Embiid is expected to return Wednesday, along with Tobias Harris and Shake Milton bringing the total of available players to 10 for coach Doc Rivers. Seth Curry and former Celtics center Vincent Poirier remain in health and safety protocol.
Boston and Philadelphia square off on Wednesday at 7 pm EST and Friday at 7:30 pm, both on ESPN.
Watch Robert Williams' full post-practice presser below: