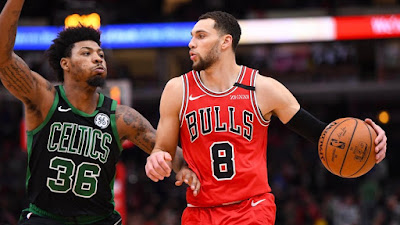 The NBA has announced that Tuesday's Celtics-Bulls game has been postponed, along with tonight's Pelicans-Mavericks matchup.
According to ESPN's Adrian Wojnarowski, Boston reportedly has fallen below the eight necessary players, while Chicago has been on a road trip out west and have had no issues related to COVID-19 health and safety protocols.

In addition to postponing two games, the NBA says it will be meeting with the NBPA about modifying the league’s Health and Safety Protocols. pic.twitter.com/M8pfsqs0nE


This marks the second straight game that has been postponed for the Celtics and will have to be rescheduled for a date to be determined later. On Sunday, the team's tilt against the Heat was also postponed due an inclusive test and contract tracing with Miami.
Boston had the eight required players of Jeff Teague, Marcus Smart, Payton Pritchard, Tremont Waters, Carsen Edwards, Aaron Nesmith, Daniel Theis, and Tacko Fall. It is likely one of those eight is now unavailable less than 24 hours later, but it remains unknown who for the time being.
It was reported on Sunday that Jayson Tatum tested positive for COVID-19 and due to contact tracing, Jaylen Brown, Javonte Green, and Semi Ojeleye were also place into the league's health and safety protocol -- which requires for them to quarantine 10-14 days.
Late last week, Robert Williams III also tested positive for the coronavirus with Grant Williams and Tristan Thompson put in quarantine because the trio shared a ride in a car together. Carsen Edwards was also in the same vehicle, but was exempted because he was wearing a mask.
The Celtics have a total of seven players currently in protocol and two out with injuries. Kemba Walker is reportedly close to make his season debut from a nagging knee injury and Romeo Langford, who's rehabbing from wrist surgery, could return sometime in February.
The NBA and NBPA plan to meet a some point today to potentially modify COVID health and safety protocols, while there is a Board of Governors meeting scheduled for Tuesday. In the wake of rising coronavirus cases, the NBA has now postponed four games so far in the first three weeks of the season.
In the meantime, Boston's next game is set to be played on Wednesday against the Orlando Magic, the first of a two-game set at home.
Joel Pavón
Follow @Joe1_CSP