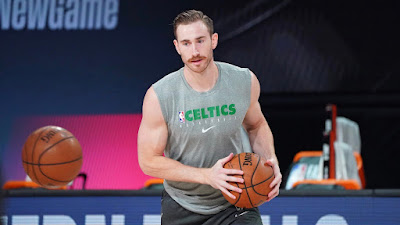 Following three tumultuous seasons with the Celtics, Gordon Hayward signed a four-year, $120 million deal with the Charlotte Hornets this past offseason.
Unfortunately for Hayward, his time in Boston was focused around injuries, beginning with a dislocated left ankle and fractured left tibia 30 seconds into the 2017-18 campaign and then had other ailments that seemed to be dumb luck along the way.
Hayward was enjoying a bounce back season prior to the postponement of games due to the COVID-19 pandemic and even turned it up a notch during the eight seeding games in the Disney Bubble, only to suffer another ankle injury to start the playoffs. Though this time it was the opposite leg from his gruesome ankle break three years prior, that led to being sidelined for nearly the entire Celtics postseason run.
In a recent interview with The Athletic, Hayward opened up about his time in Boston and other topics.

"Obviously it was disappointing with how everything played out there," Hayward tells Sam Amick. "A lot of it is just not under my control. I would have never imagined myself getting injured my very first year there and missing the whole year, having a serious injury. That's obviously very disappointing. Last year, I feel like I played really well, and I feel like our team was in a really good position and I get injured again — like, a fluke injury — the first game of the playoffs."

Despite the veteran forward returning to the bubble a few weeks ahead of schedule from a right ankle injury, he admits that he shouldn't have rushed back.

"I honestly shouldn't have come back and played, but tried to play through it and wasn't able to be myself, so I don't think we had our full team there at the end," Hayward said. "So it was disappointing, but not necessarily stuff that you can control. Injuries happen. Those types of things happen. But I had great experiences besides those things in Boston, built great relationships, still have good relationships with the coaches and some of the players there. I have no regrets about anything that happened in Boston, and I really appreciate all the fan support — for supporting me through a wild ride of ups and downs."

As for what happened a couple of months ago in free agency, Hayward said he wanted to return to the Celtics before other teams got involved and eventually he elected to sign with the Hornets.

"New York was in the mix — the Knicks. Indiana was another team that was really interested, and we had mutual interest for a while," Hayward said. "Boston was — like, let's not forget about Boston. I really wanted to go back to Boston too. There were just a lot of options, and a lot of potential teams that I could go to, but I'd say those were the main ones. Atlanta, New York, Boston, Indiana, and then Charlotte obviously."

After 13 games, it appears Hayward has made the right decision so far, as he leads the Hornets with 22.2 points to go along with 5.1 rebounds and 3.7 assists per contest.