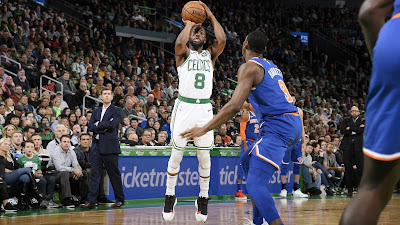 The Celtics released their updated injury report Sunday morning and Kemba Walker (knee) is set to make his 2020-21 season debut this afternoon against the New York Knicks.
The All-Star point guard was cleared to practice over a week ago before the Auerbach Center was shut down the very next day due to the league's COVID health and safety protocols, that also postponed three of the Celtics next four games.

#NEBHInjuryReport update: Tacko Fall has been downgraded to OUT. https://t.co/ZNtykTBjHP


Walker, who will be on a minutes restriction -- according to coach Brad Stevens, has been on a strengthen program for his left knee since the offseason and was eyeing a return this past Friday in the team's 124-97 win over the Orlando Magic. Unfortunately, the Celtics were off for a week and Walker made his return to practice only a few days ago.

"The way I'm feeling right now is different from the way I felt before I went into the bubble. I've just been able to take my time, really just attack my rehab from Day 1," Walker said following practice on Thursday. "I wanted to get healthy, I wanted to stay healthy, try my best to not have any setbacks. So that's the plan. I don't know. Whenever I’m feeling good, and whenever I'm mentally ready and comfortable to get out there, I will."

While Walker has been dealing with issues in his left knee since February of last year, his strengthen program seems different this time around since the start of the NBA's COVID-19 hiatus and following the team's exit from the bubble in Orlando.

"Maybe we didn’t do him justice by bringing him back too fast in the bubble," Danny Ainge said during the preseason. "We don't want to make that mistake if it was a mistake this time. I’m not blaming anybody. But it’s not a perfect science. It’s guesswork, and we’re trying to do the bet with the information that we have and get him as strong and healthy as he can be, so he can make it through the year."

Walker returns without teammates Jayson Tatum, Robert Williams and Carsen Edwards, who all remain in health and safety protocol. Romeo Langford is also out, as he recovers from wrist surgery.
Tacko Fall was downgraded from questionable to out after he rolled an ankle late in Friday night's win. Daniel Theis has a right middle finger sprain, but will still play against New York.
Boston will tip-off  vs the Knicks in a Sunday afternoon matinee at 1:00 pm EST on NBATV.
Joel Pavón
Follow @Joe1_CSP