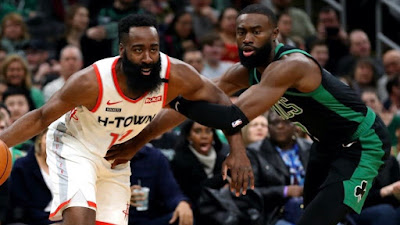 In case you missed it, James Harden is now a Brooklyn Net following Wednesday afternoon's blockbuster trade with the Houston Rockets -- which also included the Indiana Pacers and Cleveland Cavaliers.

While it remains to be seen if the move by Boston's division rivals will pan out or not, according to president of basketball operations Danny Ainge, the Celtics at no point were players in the Harden sweepstakes.

"Yeah, we had conversations regarding James. Not recently, but yeah. We did have conversations," Ainge said Thursday morning on 98.5's Toucher and Rich. "We had numerous talks, but the price really wasn't changing. The price was really high for us. And it was just something we didn't want to do.

"I'm not sure there was anybody — even the people within our organization that respected him and wanted him more — I think unanimously we decided it wasn't the time for us. And it wasn't the price."

So what was Houston's asking price? Brian Robb of The Boston Sports Journal, reports the Rockets were interested in Jaylen Brown, Marcus Smart and first round picks as compensation for Harden.
It makes sense salary-wise when matching contracts in any trade; Brown and Smart combined will earn about the equivalent of the $41.2 million Harden is set to make this season. Plus, first round picks are always sweeteners in any trade offer. Ainge simply didn't want to part with young talent and draft picks, which is exactly what Houston was looking for.
In the end, Harden cost the Nets two potential young star prospects in Caris LeVert and Jarett Allen plus, three unprotected first round picks in 2022, '24 and '26. The Rockets also own four unprotected Brooklyn draft picks that can be swapped in '21, '23, '25 and '27.
On paper, the trio of Kevin Durant, Kyrie Irving (where ever he may be currently) and Harden make the Nets clear cut favorites to win the East at least for the next 2-3 years. After that, its anybody's guest as Durant and Irving are under contract for three more seasons, with the final year being a player option, while Harden is signed for the next two.
Ainge holding on to Brown, who's having his best season as a pro so far (26.2 points, 6.2 rebounds, 3.5 assists) was probably the best move when considering the 24-year old has emerged as a legit viable second option for the first place Celtics (7-3).
Despite Ainge being intrigued the moment Houston made Harden available, it came down to the last two heavy bidders in the Nets and the Philadelphia 76ers, and trade talks just fizzled out when it came to the Celtics.

"James Harden is a great player," Ainge said. "He is one of the best offensive players that have played the game in any era. I think every team in the league respects him and fears him as an opponent."

Boston and the Nets don't see each other until the second half of the season, as no date has been set yet.
Joel Pavón
Follow @Joe1_CSP