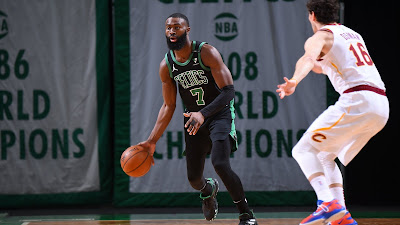 It safe to say that Marcus Smart could arguably be considered as the unofficial captain of the Celtics, who is also the longest tenured player on the team.
The veteran guard has seen it all during his time in Boston, being one of two of the only players to still be on the roster from the 2016-17 campaign -- the other is Jaylen Brown.
That season was led by league MVP candidate Isaiah Thomas, who carried the Celtics to a No.1 seed in the East and also a trip to the conference finals. Brown, just rookie back then, averaged 6.6 points on 45.2% shooting but in 17 minutes per-contest, while playing behind Avery Bradley and Jae Crowder.
Four plus years later and Brown has not just doubled his playing time, but has become a go-to scorer on deep playoff-contending team with career-high numbers in points (27.7), shooting percentage (53.2%), 3-point average (43%) and free throws (77.8%).

"His patience and poise when he has the ball," Smart said. "His rookie year, year two, that Jaylen Brown would just put his head down and go and not understand where he was going. But he worked hard, you've got to give him credit. And it shows. That's why he's one of the best young players in this game and doing what he's doing – and doing what he's doing for this team. So I'm just very, very proud of the way that he approaches every game, and like I said you can see it and it’s working out for him."

"He's been great with the scoring, he's making great physical drives, obviously, open catch-and-shoot shots but then also really tough shots sprinkled in," Brad Stevens said. "So he's constantly working to improve. He doesn't play passive. And I think that his skill, his improvement, and his aggressiveness are a good combination."

While the Celtics this season have been ravaged by injuries (Kemba Walker, Payton Pritchard) and COVID-19 health and safety protocol (Jayson Tatum, Robert Williams), Brown has assumed the responsibility of being a team leader. In five games that Tatum has missed, Brown is averaging 29.5 points, which includes a 30-plus and a 40-plus point performance.

"I’m just grateful to be put in positions to have responsibility and have weight and things like that,” Brown said following Sunday's victory. "I've looked forward to the challenge. I'm grateful that it's finally gotten here, but I'm just trying to do the best with what I've got."

The Celtics are expected to have Tatum back in the lineup and Walker sit out to rest on a second night of a back-to-back, as the team faces the Chicago Bulls on the road Monday -- tip-off is at 9 pm EST.
Joel Pavón
Follow @Joe1_CSP