Marcus Smart on Celtics' team defense this season: 'Our effort just isn't there' 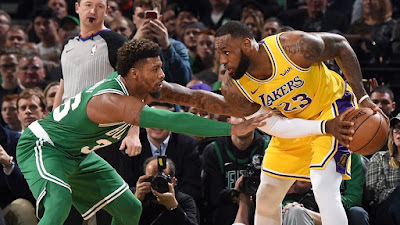 The Celtics are hosting the NBA champion Los Angeles Lakers in a rare Saturday night tip-off at TD Garden.
Boston at 10-7 will have to figure out how to put the clamps on LeBron James and company following a 110-106 loss to the Spurs on Wednesday, where at one point coach Brad Stevens forced his team to play a zone defense because their man-to-man coverage was horrible.
Though it worked and the Celtics were able erase a double-digit deficit, they still lost the game and Marcus Smart expressed his frustration while blasting his teammates about the lack of defense so far this season.

"Our effort just isn't there. We're dying on screens, me included. We're a step slow. We're confused," Smart said after the Celtics' Saturday morning shoot-around. "We gotta fix it. There's no way we shouldn't be able to guard guys man-to-man and we have to go to a zone because we can't guard. It's definitely going to be fixed, but it's going to take us to fix it."

Stevens, who normally doesn't challenge his roster in front of the media, has lots to be concerned about, especially since this season's Celtics are the worst defensive unit he has coached since arriving in Boston in 2013.

"We were going to zone out of necessity because we couldn't stop a nosebleed," Stevens said after the Spurs game. "There's a lot of things that we have to clean up, but it has to be in your DNA, it has to be part of your makeup."

The Celtics were a top-five defensive team a season ago, but have fallen drastically from that feat this year -- allowing opponents to score 47% of their field goals -- good for 22nd in the league. Not to mention, opposing teams are hitting 64.8% of their shots within five feet of the rim (24th in the league), which was a huge problem against the Spurs.
Despite Boston being tied for third in the NBA in steals (9.1 per contest), even team president of basketball operations Danny Ainge doesn't understand at times why their ability to play team defense has been nonexistent.

"Yeah I wish I knew the answer there," said Ainge on Thursday. "It was painful to watch for stretches [Wednesday] night, the defensive effort...It's not an excuse because we just showed against Cleveland, and I thought half of our Chicago game, after being embarrassed with defense in Philadelphia, the team responded. "I know it's in there, I know it's in them, but if you don't play defense consistently…I mean you just don't go on the road and give up 56 percent shooting and win very often. It's a formula for disaster."

Tonight will be a huge test, the biggest of the season up to this point when they take on the Lakers, as they have to fix their defensive woes sooner rather than later.

"We gotta give a better effort than that," Smart said. "It's definitely frustrating, but the good thing about this league is you get to turn around and redeem yourselves. So we've got another game tonight coming up against the defending champs, and what better way to do it, to get back on track, than tonight."

The Celtics and Lakers tip-off at 8 pm EST and will be broadcasted nationally on ABC.
Joel Pavón
Follow @Joe1_CSP