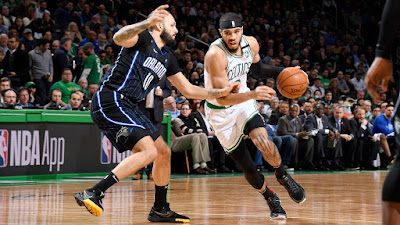 The Celtics matchup with the Orlando Magic scheduled for Wednesday, January 13 has been postponed by the NBA, according to ESPN insider Adrian Wojnarowski.
This is Boston's third straight game to get rescheduled and the second consecutive for not having the eight required players to field a team due to COVID-19 protocols and injuries.

The Magic and Celtics were scheduled to play Wednesday and Friday in Boston, but Magic won't be traveling today, sources tell ESPN. It is immediately unclear the status of the Friday game, but sources say Wednesday's game has been postponed.

Sunday's game between the Celtics and Heat was postponed due to Miami's COVID-19 issues and contact-tracing. Today's Celtics and Chicago Bulls matchup was postponed on Monday following reports of another Boston player being put into the league's heath and safety protocol.
The Magic were scheduled to take on the Celtics in a two-game set in Boston beginning Wednesday, but they did not travel Tuesday and now the status for Friday's tilt at TD Garden remains unknown.
Jayson Tatum, who just won Eastern Conference Player of the Week honors, has reportedly tested positive for the coronavirus along with teammate Robert Williams III in the past few days, while Jaylen Brown, Semi Ojeleye, Grant Williams, Tristan Thompson, and Javonte Green are all already in safety and heath protocol due to contact-tracing.
This is the league's fifth game to be postponed within the first three weeks of the season, as the NBA and the NBPA on Tuesday afternoon agreed upon new health and safety protocols.