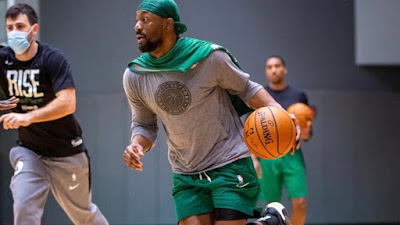 The Celtics returned to practice on Thursday for the first time in nearly a week since their last three games were postponed for COVID-related health and safety protocols.

"This is the first time I've been back in the building since last Friday's walkthrough," coach Brad Stevens said. "It was important for us to get back today if we hope that we're good to go [Friday]. We cross our fingers and we'll see."

A familiar face was also spotted at the Red Auerbach Center as Kemba Walker, who was cleared to practice last Friday before the team's facility was immediately shut down the next day due to Jayson Tatum testing positive for COVID-19, was available to join his teammates.

"He's been able to continue to do his rehab in 1-on-1 settings," Stevens about Walker's return to the practice floor. "He went full go today for an hour with us; we did not go live but we did a lot of up and down, just trying to get our legs back in some ways with guys that haven't done anything for a week. And he looked good."

Walker is continuing a rigorous strengthening program, following a stem cell injection in his left knee. While he's not ready to return to the lineup just yet, the goal still remains to get Walker's knee back to sustainable strength and it seems like he's pace to make a return any day now, according to Stevens.

"His strengthening has gone fantastic. He's put in a ton of work," Stevens said. "I felt this way in the bubble but the bubble was constrained more by time, with regard to how quickly the playoffs were at hand. This has been a planned out, day-by-day, well-executed deal by our training staff and by Kemba. When he comes back, it'll be because he's ready and because he feels great and he's ready to be Kemba."

Though it's not the first time the Celtics All-Star has said "I'm feeling really good" when it came to a prior stint on the injured list last year, Walker believes a different approach with his rehab this time around has been a better one.

"The way I'm feeling right now is different from the way I felt before I went into the bubble. I've just been able to take my time, really just attack my rehab from Day 1," Walker said Thursday. "I wanted to get healthy, I wanted to stay healthy, try my best to not have any setbacks. So that's the plan. I don't know. Whenever I'm feeling good, and whenever I'm mentally ready and comfortable to get out there, I will."

As for the rest of those on Celtics roster that could potential play Friday night against the visiting Orlando Magic, Tristan Thompson and Grant Williams were cleared to practice after their seven-day stint in quarantine -- meaning most likely they'll get the ok from the NBA to play.
Daniel Theis and Carsen Edwards are the two latest Celtics players to be put in the league's health and safety protocol, joining Jayson Tatum, Jaylen Brown, Javonte Green, Rob Williams and Semi Ojeleye who are all in COVID protocol.
The team did list Brown, Ojeleye, Theis and Green as 'questionable' against the Magic, meaning Stevens could possibly have up to 12 players available. But if they are not cleared, the Celtics will still have at least the eight necessary to suit up to play.
Here's what the Celtics depth chart could look like:
Guards: Smart, Teague, Pritchard, Waters
Wing: Nesmith
Bigs: Thompson, G. Williams, Fall
Questionable due to NBA health and safety protocols: Brown, Ojeleye, Green, Theis
Out: Edwards, Tatum, R. Williams, Walker, Langford
Tonight's Celtics game is scheduled for a 7:30 pm EST tip-off against the Magic at TD Garden.
Joel Pavón
Follow @Joe1_CSP