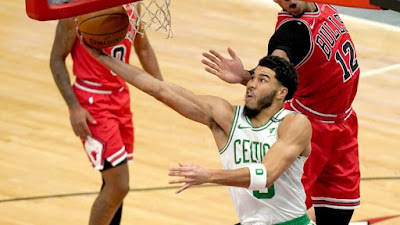 Jayson Tatum returned to the lineup on Monday night to help lift the Celtics past the Chicago Bulls in a 119-103 win at the United Center.
The All-Star forward finished with 24 points on 10-21 shooting, including 3-6 from behind the arc and five assists in 31 minutes of action. Tatum missed the previous five games over the past 17 days after testing positive for COVID-19 in early January.

"It was tough, especially your initial reaction once you find out," Tatum said of the mental toll. "I don't know if it's panic. But you definitely worry because of everything you read about it and hear, how many people it's affected and how many people didn't make it."

Despite Tatum feeling a little tired in the first half, he got some much needed support from teammate Jaylen Brown, who continued his offensive tear from 24 hours earlier against the Cleveland Cavaliers, scoring a team-high 26 points on 10-21 from the floor.

"The first four days or so, for lack of a better word, it bothered me," Tatum recalled. "It was on my mind. I was thinking, do I feel OK, do I not feel OK? Can I smell this? Does my chest hurt? Or am I just overthinking?"

Daniel Theis netted 19 points in his second consecutive start, while Marcus Smart recorded a double-double of 13 points (4-6 made attempts) and 11 assists -- tying a career-high to give the Celtics (10-6) another win on a second night of a back-to-back.
After playing the last four tilts, Kemba Walker sat out to rest his left knee that kept him sidelined for the first 11 games of the season.
Zach LaVine led the Bulls with 30 points, including hitting 6-of-10 on 3's and Lauri Markkanen scored 18. Thaddeus Young chipped in 16 points, nine rebounds and nine assists, while Otto Porter Jr. added 13 off the bench in the Bulls (7-10) second straight loss.
The Celtics took a 60-50 advantage into halftime before Tatum scored seven of the team's 11 unanswered points to open the third period. The Bulls couldn't cut into the deficit and fell behind by as many as 22 and the game was just out of reach the rest of the way, as both teams emptied their bench.
It was another great shooting night for Boston, as they hit over 50% of their field goal attempts and 3-pointers, while the Bulls shot 46.6% from the floor and 43.6% on 3's.
The Celtics are scheduled to head out to San Antonio on Wednesday, however the game remains up in the air to played due to the NBA's postponement Monday night of the Pelicans and Spurs.

"My thought would be we should not fly there until we know. That's the bottom line. That's my only thought going through my mind with all the travel we have coming up," said Celtics coach Brad Stevens.