Josh Jackson: It was 'too late' to work out with the Celtics 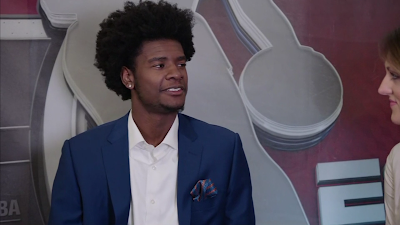 Josh Jackson said he did not work out with the Celtics due to not having enough time after Boston agreed to trade the No. 1 pick to the Philadelphia 76ers.

The deal, which was finalized on Monday, saw the Sixers send the No. 3 pick to Boston. Jackson was scheduled to work out with the Celtics on Tuesday, but it never happened.

A source told ESPN on Monday that Kansas star refused to work out for the Celtics without be assured that he was definitely on their draft board and they'd keep the No. 3 pick.

In a pre-draft interview with ESPN, Jackson confirmed that he did not work out with the Celtics and his reason why


"They did a little bit of moving around with their pick," Jackson said. "I felt like they made it pretty clear who they were going to draft with the No. 1 pick, so I didn't really feel like it was worth either of our times for me to work out with them. But then when they, you know, did the flip and went to No. 3, by then it was too late." [ESPN]

Following the trade, the Celtics worked out Duke's Jason Tatum on Monday afternoon. Danny Anige told reporters that he and the organization believes there was "a really good chance the player we'll take at 3 is the same player we would have taken at 1."

While most expect the Sixers to draft Markelle Fultz at No. 1, most ESPN's mock drafts have Jackson going to the Celtics at No.3, despite not working out with the team.

According to multiple sources, the Knicks (No. 8 pick) and the Bulls (No. 16 pick), both have shown interest in Jackson and would be willing to trade up in the draft.