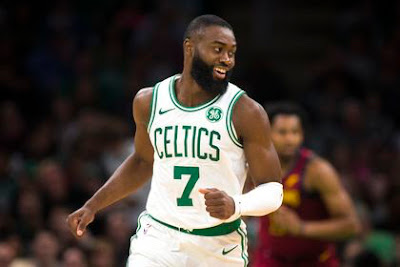 Jaylen Brown and the Celtics have reportedly come to an agreement just ahead of Monday's 6 p.m. ET deadline. According to ESPN's Adrian Wojnarowski, Brown has agreed to a four-year, $115 million rookie-scale contract extension.


Brown becomes the first Celtics player to earn a rookie extension since Rajon Rondo in 2009 and will be the third highest paid on the current roster at about 28.75 million per-year, after Kemba Walker and Gordon Hayward, beginning next season.

The deal, which will keep Brown in Boston through 2024, comes shortly after it was reported by Adam Himmelsbach of the Boston Globe that both Brown and the Celtics had come to "no final resolution" on contract negotiations late Monday afternoon.


Celtics president of basketball operations Danny Ainge confirmed last week that the team had made more than one offer to Brown, who would have been a restricted free agent next summer if he had not signed an extension before Monday's deadline.

Brown, who averaged 13 points, 4.2 rebounds last season, reportedly turned down a four-year, $80 million extension offer from the Celtics after hiring his new agent Jason Glushon, but didn't seem worried about both sides coming to an agreement.


"It's really not overwhelming me or ruling my thoughts," Brown told the New York Times last week. "I know what type of talent I have. I'm confident in myself. I'm confident in my ability. It's not something that's keeping me up at night." [Yahoo Sports]

Brown and the Celtics will tip-off the 2019-20 campaign against the 76ers on Wednesday night in Philadelphia.