Gordon Hayward opens up about Isaiah Thomas selling him on Boston 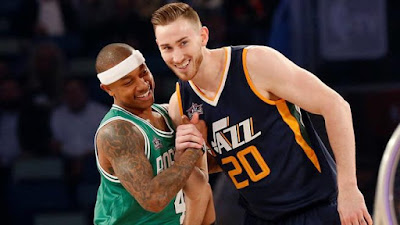 Gordon Hayward was really looking forward to playing alongside Isaiah Thomas this season. If it weren't for the All-Star guard's recruitment this past July, there's a good chance Hayward would not have chosen Boston, according to the newest Celtics swingman.

Hayward recently opened up about his free agency process and eventually becoming a Celtic this past summer in a blog titled 'Back to Basketball' on his website, where he credits Isaiah Thomas for selling him on the city of Boston


“[Thomas] didn’t just help recruit me to Boston—he was a big piece of that recruitment,” Hayward, who chose a max deal in Boston over the same contract in Miami (and even more money from the Jazz, his first and only NBA team). “He had talked a lot aboutthe  city and how it was different to be a Celtic. He talked about the intensity of playing in the Eastern Conference Finals, playing at the Garden in the playoffs, and how much fun it was, and how much fun he had playing in Boston.

“All of that ultimately helped win me over,” Hayward continued, “and by the time of the trade, I had already started to build a little bit of a relationship with [Thomas].”

In his two and a half seasons, Thomas was never shy about openly trying to bring talent to the Celtics, especially on social media. Whether it was Kevin Durant, Al Horford or Hayward, Thomas wanted to make Boston a destination for any available star and help Danny Ainge turn his roster into a championship contender.

If the last two off-seasons have thought any Celtics fan anything, it's that Isaiah Thomas was a huge part of why the C's are in the position they're currently in, with an opportunity to win now.

Before Hayward could even step on the court with Thomas as his running mate, he was shipped off to Cleveland in return for superstar Kyrie Irving.


"My first reaction was to text I.T., and wish him the best. That was a really strange moment because I’d really been looking forward to playing with him.

"But that is just how the business works. I have spent enough years in the NBA to realize that things can change like that, in an instant. Still, even though we didn’t necessarily get to be teammates, I’m definitely going to be watching him as a fan. In this league, I think we are all rooting for each other in some way or another—just to try to stay healthy, to try to be the best we can be."

Though Hayward was admittedly disappointed about not getting the chance to play with Thomas, he is now excited about the potential of an All-Star of Kyrie Irving's caliber as a teammate


“Being able to play with Kyrie is an amazing opportunity. He’s a guy who can really do it all,” Hayward wrote. “He has the ability to score one-on-one, score in clutch situations, get his own shots. He’s also a playmaker, and someone who can make the game easier for me. He’s going to give me more space, because the defense has to respect him.

“Whether he’s driving, or because somebody shifts off of me to go to him, and he can kick it out, I will have more space,” Hayward added. “Just his presence on the floor will do that for me. And of course, I can always kick it right back to him, too. The fact that he can score as well as he does and finish as well as he does—it just gives us another huge weapon.”

Hayward's blog is not only a 'thank you' to Thomas, but he also praises Al Horford, Marcus Smart, Jaylen Brown and Jayson Tatum as he prepares to officially play his first season as a Celtic.

With Irving now in the driver's seat, Hayward values what he brings to the table as a young veteran with unique wisdom.


"When it comes to his experience, he’s done it all. He has been through the lows when he was first in the league, playing as a rookie. Going through that ultimately helps you become a better player. And then getting a chance to play with LeBron James, and going to the Finals three straight years—those are experiences that are invaluable and that you really can’t teach.

"Having that experience of playing in those big moments, dealing with the circus of the media, dealing with expectations, those are all things that I think he can help us with. Because most of us, myself especially, have never been through that."

The 27-year-old Hayward averaged a career high 21.9 points per game last season, while shooting 47.1 percent from the field for the Utah Jazz.