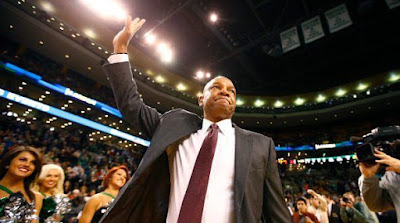 In the summer of 2013, the new 'Big-3' era was over in Boston after Ray Allen was celebrating a championship with LeBron James and the Heat. Paul Pierce and Kevin Garnett were traded to the Nets, while Rajon Rondo recovered from a torn ACL. Doc Rivers did not want to stick around for a second Celtics rebuild, electing to coach the 'win now' Clippers, along with a general manager title and roster control.

Four years later, the Celtics, fresh off a trip to the Eastern Conferance Finals, have made it further with Brad Stevens at the helm than Doc Rivers has in Los Angeles.

Now with the loss of Chris Paul (traded to the Rockets) and Rivers stripped from president of operations duties, the Clippers look like they are in rebuild mode for the foreseeable future.

10-years ago, Rivers was set to enter, which would be his best season as an NBA head coach. The Celtics had just acquired Garnett and Allen still in their primes. For the first time in 20-years, the C's were consider immediate title contenders and the league's first 'super-team,' who won 66 games and raised a championship banner in year one.

Rivers, who was in Boston for a charity event, admits he still keeps a close eye on the Celtics, where he coached for nine years. After the blockbuster trade for Kyrie Irving, Rivers believes the All-Star point guard will do well in Celtics green

When it comes to trades, Rivers has never been surprised by the moves Danny Ainge has made over the years, especially since Brad Stevens was hired to replace Rivers as Celtics head coach


“I mean, I think Cleveland and them are obviously the two teams to beat in the East, but this tells you why I think Danny and I were successful together, and it’s why Danny and Brad, they’ll be successful, is because they’re never scared to make moves or changes,” Rivers said. “You think about it, they won the East last year and they have six or seven or eight new players, and they really have changed their identity. No Avery (Bradley), no (Jae) Crowder, that’s their heart and soul of their defense.

“They went out and got talent, man. That’s gonna show. I think what they’ve really done, to me, what they didn’t have in the past, and I think every team has to have it, you have to have closers. You can be as good as you want to be, and at the end of the game you need to have guys who are going to close the game for you. Now they have those. I don’t know if they’ve had that in the past, and now they do.” [Boston Herald]

Though Rivers misses the city of Boston, he doesn't regret his decision to take his coaching talents to Los Angeles, but does admire what the Celtics have been able to build over the last four years since his departure.


“My love for them hasn’t changed,” Rivers said of the Celtics. “For me, it was time for me to change. When you’re somewhere for nine years, you don’t think whether it’s the right or wrong decision, you think it’s the right decision for you at that time. But as far as wanting them to do well, that will never change. Unless they’re playing me.

“Other than that, love Danny (Ainge), love (owner Steve Pagliuca), that whole group, and I just want them to do well. I really do. I love what they’ve done. I think the turnaround in four years starting with hiring Brad and then going from … (Ainge) and (assistant general manager) Mike Zarren have done the best job I’ve seen in sports in a long, long time of rebuilding. Maybe ever.” [Boston Herald]

Despite Rivers' decision to leave being a logical one at the time, most would say the Celtics have come out ahead since the summer of 2013.

Still the question remains, would the Celtics be as well off if Rivers had decided to stay in Boston?