Jayson Tatum well aware of what the Celtics expect from him 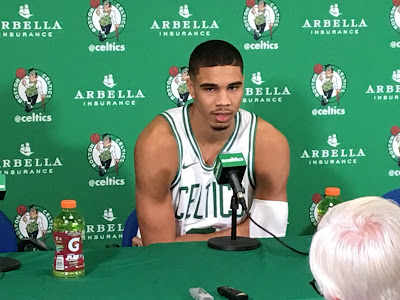 Jason Tatum has yet to play his first NBA game, but has already gotten the approval of his Celtics teammates well before the start of 2017-18 season.

The third overall pick in this year's Draft, was asked if Kyrie Irving's comments during last week's Nike Uniform Showcase party were in fact true that he was a "bad dude."


“Some days, some days," responded the 19-year-old rookie.

Jaylen Brown, Tatum's best friend on the Celtics these days, knows how great the C's rook can be, especially after paying Summer League together.


"That's my guy, man," Brown said of Tatum."Super talented, fun to be around, and it's a pleasure. The sky is the limit for [Tatum], everybody knows that. What we do, we push each other. We push each other to be great. That's what people expect from us, that's what we we expect from ourselves. We just try to get better each and everyday. I think he's a tremendous talent, great guy to work with since he's been here. And he has a similar mindset to me so I can appreciate that. He just wants to get better and be great."

Tatum didn't hesitate to second Brown (also a third overall pick a year ago) on their connection prior to officially becoming teammates in Boston.


“He’s only one year older than me,” Tatum said of Brown. “We’ve been roommates before at All-American camps. We’ve known each other for years, and I guess that’s where the relationship started. We’re neighbors [at our lockers]. We’re always with each other.”

The 6'8" rookie acknowledged that his All-Star, veteran running mates have pushed him to be better along with his head coach.


“It’s been great having Al [Horford] back, Kyrie [Irving], Gordon [Hayward], everybody,” Tatum said. “There’s a lot of things without them saying anything — just how they approach workouts, their demeanor and things like that, they just lead by example.

“I know there’s a lot of things I’m not so great at, and a lot of things I need to get better at,” Tatum continued. “Everyday in workouts [Celtics coach Brad Stevens is] always there, watching me and telling me what I can do better.”

Despite averaging 18.8 points and 8.8 rebounds per-game during Summer League, Tatum will have a secondary scoring role ready for him, as the Celtics have gutted almost their entire roster from a season ago, something Brown believes he can handle.

As Tatum looks forward to living up to expectations and prepares for the start of his professional career, one thing is certain when it comes to having Brad Stevens as a head coach


“One thing told is to always be ready when my number is called,” added Tatum.