Cavaliers expect Isaiah Thomas to be back by January 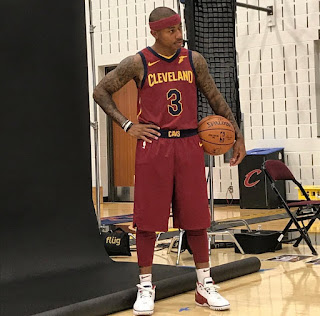 Former Celtics point guard Isaiah Thomas could make his debut in a Cavaliers uniform by the end of the calendar year.

According to ClevelandDotCom, the Cavaliers All-Star, who was acquired in this summer's blockbuster trade, along with Jae Crowder, Ante Zizic, a first and second round pick for Kyrie Irving, is rehabbing a right hip (labrum) injury and is expected to be playing games by January.


Injured Cavs guard Isaiah Thomas expected back on the floor by January, according to the team. He has started on-court activities.
— Jason Lloyd (@JasonLloydNBA) September 25, 2017


Thomas was shut down during the Eastern Conferance Finals this past spring, as the Celtics lost to the Cavaliers in five games, but reportedly the guard will not require surgery.

GM Koby Altman and the Cavs, who were very vague when it came to a timeline on Thomas' rehab plan during their introductory press conference earlier this month,  have been encouraged by his progress so far, but will not rush him back, especially with Derrick Rose to fill in as a starter for the foreseeable future.

Thomas, who averaged 28.9 points and 5.9 assists last season, may be looking at a possible Christmas Day season debut, when the Cavaliers take on the NBA champion Golden State Warriors at Oracle Arena.

The Cavaliers could also hold out for a Jan. 3 return, when Thomas visits Boston to take on the Celtics for the first time at the TD Garden.