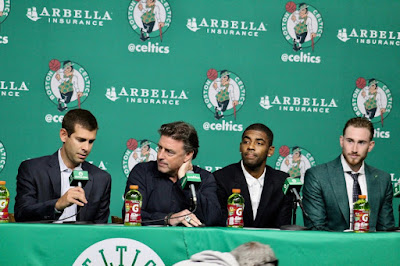 It's been nearly a decade since the last time Gordon Hayward was able to call Brad Stevens his head coach. At Friday's press conference, Hayward reminded Stevens that he hasn't forgotten the influence he had on him during their days at Butler.

According to Hayward, Stevens was the first person who made him realize he could one day play in the NBA. Now as an All-Star who is entering his eighth season, Hayward and Stevens will embark on a new era in Boston where the expectations are higher than ever for Stevens, since he first sat on the Celtics bench in 2013, with Hayward as a vital piece alongside Kyrie Irving and Al Horford.


"I think both of us have grown," Hayward said. "For me, especially as a person and a basketball player. In college, your college coach is somewhat like a father figure, you're younger, you lean on them a lot. Now I'm a father and I have two little girls of my own and definitely just like Kyrie grew up in college... For me, just a lot of growing up, I think, as a person, as well as a basketball player.

"I always say that coach Stevens was the first person -- I always had a dream to play in the NBA but he was the first person I think made me realize I could maybe get there one day. And so to be back and reunited with him again, I'm beyond excited and can't wait to get to work."

Friday's introductory press conference for Irving and Hayward was mostly loose at TD Garden -- one that was filled with laughs and smiles between Hayward, Irving and the Celtics brass. Hayward reminisced about his relationship with Stevens and how far they've come since his teenage years to reuniting in Boston.


"Yeah, a lot has changed since we last were together," Hayward explained. "I don't know if I would have imagined at 5:45 a.m. workouts at Brownsburg High School that we'd both be sitting here one day."

"He couldn't even grow a beard the last time I saw him," Stevens added.

The light-hearted exchange was probably one of the most memorable moments of the press conference as Stevens will take on the task of building his offense around one of the league's newest budding duos. For Irving, this isn't the first time he's entered a season on a team with championship aspirations -- it's technically his fourth consecutive season, only this time he won't be alongside the best player in the league in LeBron James -- but for Hayward this is uncharted waters.

Hayward left behind a franchise in Utah that he helped rebuild into a playoff contender in the western conference to rejoin his college coach in Boston and play for an organization that will look to take down James and the Cavaliers in the east and ultimately reach the NBA Finals for the first time in seven years.