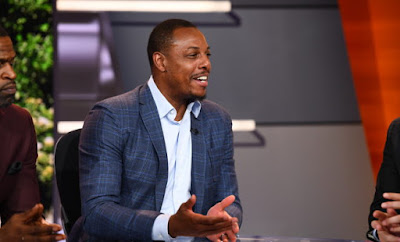 Paul Pierce has officially signed on with the worldwide leader ESPN as an on screen NBA analyst. The former Celtics captain sounded excited about his new chapter post-retirement in a press-release through the network.


“I always had fun doing guest coverage with ESPN, so it is exciting to officially join the teams at NBA Countdown and The Jump. I love hoops, my whole life has been about the game, so this feels like a natural evolution in my career and I can’t wait for the season to get started.” [ESPN]

'The Truth' will appear regularly on NBA Countdown, which air on both ESPN and ABC, plus The Jump a few times a week with host Rachel Nichols.


“It’s going to be great for NBA fans to have Paul join NBA Countdown and The Jump on a full-time basis. I’m excited for our viewers to get the full ‘Truth’ – because Paul’s analysis matches his personality – he’s very honest, candid and his energy is infectious.  His insights and anecdotes about his legendary playing career jump off the screen, and we’re looking forward to his perspective on what is shaping up to be an incredible season.”

Pierce played 19-season in the NBA, he signed a one-day contract with the Celtics in July before retiring. Pierce was drafted by Boston in 1998 and during the next 15-years in green, he helped raise the franchise's 17th banner, while grabbing Finals MVP honors in 2008.

After being traded in 2013, Pierce's last four seasons of his career were spent with the Nets, Wizards and Clippers before officially calling it quits.

The Celtics plan to retire Pierce's No. 34 jersey at the TD Garden on Feb. 11, the same night the C's take on LeBron James and the Cavaliers.