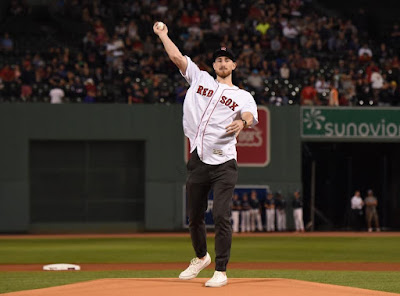 Gordon Hayward made his Red Sox debut at Fenway Park on Thursday night, before they took on the Houston Astros. Just kidding, the Celtics All-Star only threw out the first pitch prior to the game.

Though not his first trip to Fenway, this was Hayward's first Red Sox game since signing with the Celtics this summer and it was fresh off a trip to Newport, Rhode Island, where the Celtics set-up shop for the last three days to start their training camp.

“I hadn’t been working on it; I hadn’t thrown a pitch since probably eighth grade,” Hayward said. “I definitely played it safe: I lofted it in there, but I didn’t bounce it in so that was good.”

Hayward enjoyed the full Fenway experience after throwing out a change up high and outside as his pitch.

Despite Boston losing 12-2 to the Astros, Hayward got to meet and chat with the Red Sox players that made him feel right at home


“Just athletes talking to each other,” Hayward said. “They welcomed me to the city and said if I had any questions or anything [to ask]. Everyone has a great bond, so it was good.”