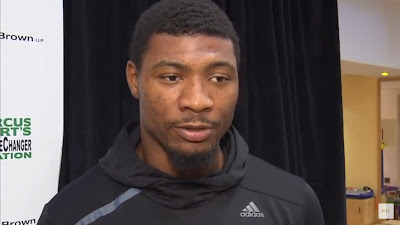 While Danny Ainge was busy making many changes to the Celtics roster this offseason, Marcus Smart decided to make a few changes of his own.

The 23-year-old guard, who's entering his fourth year as a pro, has shed at least 20 pounds over the summer. Smart hired a personal chef and has been working out everyday for the last two months to drop from 240 pounds to 219 pounds.


“It’s a new me. It truly is,” Smart said Wednesday evening during a visit to the Floating Hospital for Children at Tufts Medical Center in Boston. “I’m more explosive and things like that, and I’m healthy … I locked in this summer. I was in the gym every day. Nonstop, every day. I’ve been consistent and I’ve been working my butt off.” [Celtics.com]

Smart, now the longest tenured Celtic, watched Ainge only bring back three of his teammates from last season's squad that made it to the Eastern Conferance Finals.


“I’ve talked numerous times to Danny and Brad (Stevens) before any [summer transactions] happened, even last year during the season, about being ready,” said Smart, who averaged 10.6 points, 4.6 assists and 3.9 rebounds per game last season. “I’m ready to take on that role. And now it’s put into reality where we don’t have Avery and we don’t have Jae Crowder (traded to Cleveland). A lot more responsibility is on my shoulders.” [Celtics.com]

Smart learned a lot from Bradley and Crowder during their time together. The same could be said about Isaiah Thomas, who was also traded, along with Crowder, Ante Zizic, a future first and second round draft pick to the Cleveland Cavaliers for Kyrie Irving.


“He’s always played way, way above any limits that anybody has set for him,” Smart said of Thomas. “That’s the type of guy you like to be around. He’s the type of guy that brings energy, he brings positivity, he uplifts people. He has that type of personality where he talks, people listen and he changes lives and he doesn’t even know it.

“I know everybody in this city is going to miss [Thomas],” said Smart. “We love him and we understand the circumstances, but he will never be forgotten.”

Though Smart is still digesting the trade of his former teammates and mentors in Bradley, Crowder and Thomas, he's excited about the upcoming season and to welcome new members of the Celtics roster.


“Kyrie is just like Isaiah in a way,” Smart said. “They both bring that type of toughness as smaller guards. They’ve played above everybody’s expectations. Both guys can score the ball very well. Both guys can create their own shots and really dominate a game, especially in the fourth quarter.”

As Smart enters a contract year with the Celtics, there will be higher expectations, especially if an opportunity arises to start alongside the two All-Star offseason acquisitions in Gordon Hayward and Irving for another deep playoff run.

With Smart's summer workout and mindset, it's a great first step that will hopefully result in a contract extension before next July.