Kyrie Irving on speaking to LeBron James before trade request from Cavs: 'Why would I?' 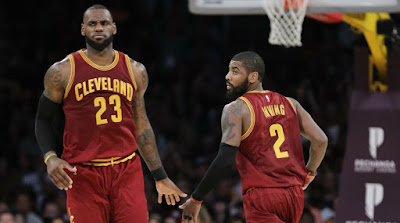 Don't expect Kyrie Irving to apologize to LeBron James anytime soon, in fact, he doesn't think he owes his former teammate an explanation for wanting out of Cleveland.

Irving went on ESPN's First Take on Monday, where he talked extensively about his trade to the Celtics, what led to his decision to leave, and of course, his relationship with James.

Show hosts Stephen A. Smith and Max Kellerman asked Irving if he talked to James before he left -- a question that he's been asked a handful of times since the deal and is vividly tired of being questioned about it.

Smith: "If you don't speak to someone about it, they might take it personally."

Smith: "Do you care about that at all?"

Irving then reiterated the same answer he's been saying since the trade went down on why he wanted to move on from the Cavs -- self-growth and how it was a life decision he needed to make for himself.


"I don't think you owe anything to another person in terms of figuring out what you want to do with your life," Irving said. "It's not anything personal, I'm not here to tirade anybody or to go at any particular person or the organization because I have nothing but love for Cleveland. I have nothing but love for the time I spent there. It's nothing about that. There comes a time where you mature as an individual, it's time to make that decision. And there is no looking back from that standpoint. There is no time to figure out how to save somebody's feelings when ultimately you have to be selfish in figuring out what you want to do."

Smith and Kellerman baited Irving to spill the beans on whether him and James had a bad relationship but Irving stood his ground in explaining that his decision to leave had nothing to do with James. However, he also took a shot at the Cavaliers' offense while explaining how excited he is to work with his new teammates in Boston.


"[I'll be] actually playing point guard, which is very, very much exciting," Irving explained. "Getting that thing on the break and allowing Gordon [Hayward] to have the space around him as well, and allowing Al Horford to make plays as a big, and having an offense that's not necessarily dictated just on me isolating. So, I'm excited about that."

With James -- who has actually been playing point guard for much of his career -- out of the way, Irving's wishes will become true this upcoming season alongside a talented Celtics roster. You could feel his frustrations boil over a bit when he was asked a follow-up question about wanting to separate from James.


"I'm saying that the overall attention to one player in a collective, is, as Stephen A. would say, is blasphemy," Irving replied. "To think about individually picking out two people, which everyone has chosen to do in terms of what I feel I deem best in perfecting my craft and going after my championship with a group, meaning that because I wanted to change the environment does not mean that it stops the pursuit in terms of what I want to accomplish as a player.

"It doesn't mean that I didn't want to play with LeBron anymore. It means I wanted to leave the environment that I was in currently and felt like as energy was draining as it was and how it would take me for a loop in a roller-coaster ride and all the false reality that was created by a lot of different outlets, it all came crashing down at one point after we lost the last Finals. All I wanted to do is continue to figure out myself, and once I did that, I was able to step up and make the decision."

Click the video below to watch a clip of Irving's guest appearance on First Take.