Kyrie Irving hasn't spoken to LeBron James since being traded 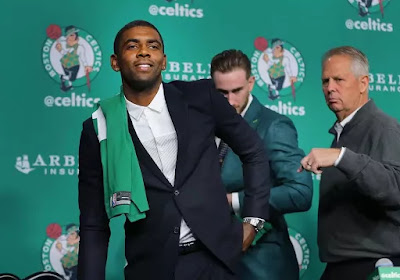 Halfway through Kyrie Irving and Gordon Hayward's introductory press conference, it almost felt like Irving was going to somehow walk away from the podium without being asked a single question about his relationship with LeBron James.

That feeling diminished when Irving was finally asked if he had spoken to James since he left Cleveland. Irving responded with nothing but positive things to say about his former teammate.


"I haven't spoken to him, and my intent, like I said, was for my best intentions," Irving answered. "The amount of ground we covered in the last three-year span, or even before that, to really realize how special that was and how much stuff happened in that amount of time, I'd be sitting up here and telling you guys a lie if I didn't tell you I learned so much from that guy."

Various reports from in and out of Cleveland pointed to Irving's sour relationship with James as the biggest reason why Irving requested to be traded back in July. No question James' influence played a part in Irving's development as a player, and soon enough we'll see how it will affect him in his new role as a leader for the Celtics. However, Irving was clearly tired of living in James' shadow and wanted a fresh start.

Although he wouldn't say his relationship with James was a reason for him wanting to leave -- stating "It was my time to do what was best for me in terms of my intentions and that's going after something bigger than myself and being in an environment that was conducive to my potential," and adding "It's pretty direct in terms of what my intent is, and that's to be happy and with a group of individuals that I can grow with," it's safe to say his relationship with James wasn't great and had a much to do with him wanting out of Cleveland.

Irving continued to praise James and acknowledged him as one of the greats.


"You ask a lot of great players, 'What does it take to be great?'" Irving asked. "I've had the unique opportunity to play with one of the greats, and it was awesome. When you look back and you're eternally grateful for the moments that you've had and shared, you're able to put peace with that journey and start anew... This was a very very challenging decision at first but after a while when you understand and you have that confidence in yourself to understand the magnitude of what you actually can accomplish and potentially can do with other great people."

Friday's presser marked the first time Irving has addressed his relationship with James since the trade was initially announced. The same day both teams agreed to swap its All-Star point guard, James took to Twitter to shout out Irving in a tweet, which was accompanied by a video that was posted by a Cavaliers fan who thanked Irving for all of his hard work throughout his years in Cleveland.

That's the only way to be to the kid! Special talent/guy! Nothing but respect and what a ride it was our 3 years together Young Gode #Filayy https://t.co/wKYmYsmdgG
— LeBron James (@KingJames) August 23, 2017