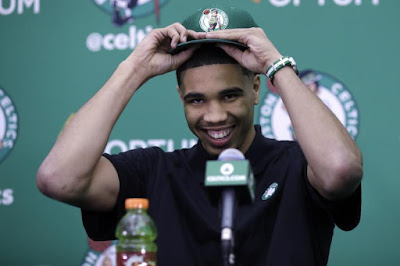 With less than two weeks left before the start of the Celtics preseason, Jayson Tatum has already made Kyrie Irving a believer.

Irving took time to speak about the Celtics' No. 3 overall pick at the Nike Uniform Showcasing party on Thursday in Boston and spoke about his brother-like relationship with Tatum and the rookie's foreseen potential.


"He's like my big little brother, or little big brother," Irving said. "That dude is so talented and he has a ceiling that sometimes you can't even really see it because -- you won't be able to see it all the time because the amount of respect that he has to earn as a rookie. But his talent is through the roof."

Tatum, whose path to the NBA is similar to Irving, is also a Duke alum. Irving pointed to Tatum's work ethic as a result of his collegiate upbringing under Coach K's program.


"He works extremely hard," Irving explained. "And, of course, having the luxury of going to Duke and understanding what it's like to be on a great team and play with good players, and how much you have to sacrifice in order for us to be a great team. So the individual goals and individual talent, we've gotta bring the best out of him and he's gotta bring the best out of us. So once he figures that out, the sky is the limit for that kid.

Irving and Tatum have already spent a lot of time together -- invaluable for the young rookie, Tatum, who's already impressed the Celtics All-Star veteran point guard. When asked what he's learned the most from Irving, Tatum couldn't come up with a specific lesson but instead commended Irving on his leadership.


"It's hard to pinpoint one (lesson)," Tatum said. "It's just, first of all, they just lead by example. And I think that's what's most important for our team. We have a great group of older guys and vets and then we've got some good young talent. So just, for the younger guys, to watch them lead by example."

Click the video below to see more of what Irving had to say at Thursday's event at Committee in Seaport Boston.