Ainge on speaking to Isaiah Thomas before trade: 'One of the most difficult conversations I've ever had' 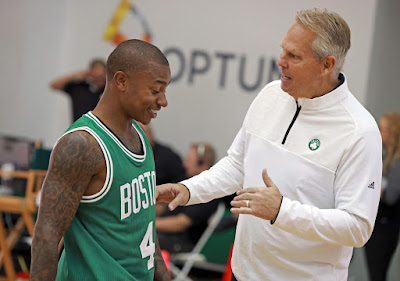 Although Danny Ainge managed to trade for one of the league's top superstar point guards in Kyrie Irving, pulling the trigger on the deal meant making one of the most difficult phone calls Ainge has ever had to make.

Ainge, who spoke with CSNNE, said that telling his former All-Star point guard Isaiah Thomas that he was heading to Cleveland, was one of the most difficult conversations he's ever had.


"It was one of the most difficult conversations I've ever had in my life," Ainge said. "IT, everybody in Boston will be grateful for IT and all that he's done. We wouldn't be here today with Kyrie and Gordon Hayward and Al Horford if IT didn't exists.

If IT really hadn't helped us get back on the map and become a respectable team and do all that he did this past year -- Second Team All-NBA and so forth -- we're probably not sitting here having this press conference, because Gordon Hayward probably isn't impressed with the team and Horford and everything else."

Thomas, who made the All-Star team in back-to-back years, turned in a career season with the Celtics, pushing Boston to the best record in the east (53-29) while averaging 28.9 points per game and led the C's to the Eastern Conference Finals. He also finished fifth in MVP voting and was named All-NBA Second Team.

Al Horford and Gordon Hayward both, respectively, gave credit to Thomas as a big reason why they decided to sign with the Celtics. Off the court, Thomas played a role in recruiting both Horford and Hayward, and did his part on the court, as well by putting together tremendous performances in back-to-back seasons.

However, Thomas' hip injury (torn labrum) that he suffered in the postseason, raised concerns for the Celtics. After missing all but Game 1 of the Eastern Conference Finals, Thomas is expected to miss the start of the 2017-18 season and after Irving requested to be traded out of Cleveland, Ainge and the Celtics leaped at the opportunity to acquire the young star.

Thomas is entering the final season of his contract, while Irving still has two years left on his deal. Thus, the Celtics dealt Thomas to the Cavaliers along with Jae Crowder, Ante Zizic, Brooklyn Nets' coveted unprotected 2018 first-round pick and a 2020 second-round pick for Irving.


"Those are the really, really hard decisions and a very hard conversation to have with IT," Ainge added. "IT, as you know, is a very good man, but he's very emotional as well, and will wear that chip on his shoulder and be out to prove how great he's going to recover form his injuries and I look forward to that. It will be the happiest day of my life when I see him make a full recovery and play as great as he did last year for another few years."