Paul Pierce on Ray Allen: 'We’re going to be linked together for life, whether we like it or not' 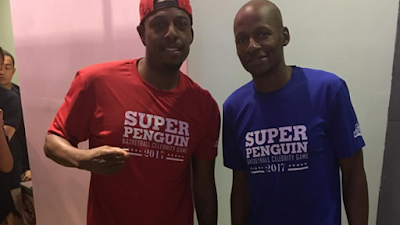 While Pierce has openly admitted that Allen's departure to the then rival Heat bothered him for years, seemingly causing a divide between friends, it looks like time might be healing old wounds.


“I just saw he left for Miami, our rival, and got mad at that,” Pierce said during a recent interview with Comcast Sports Net New England.

Both encountered each other by chance in China over the weekend while playing against one another in a celebrity basketball game. Pierce took the opportunity to speak with Allen and put their issues behind them.


“Eventually we get over things and move on, just like in relationships, good and bad relationships do,” Pierce said. “We hugged, talked about it and it’s over with.” [CSN New England]

The Celtics at some point this season will celebrate their 2008 championship banner and the message is clear from Pierce's standpoint that it's time to remember the good times that bounded that team from the moment they all got together a decade ago.

“I said, even months ago, ‘we gotta come together at some point,’” Pierce said. “We gotta let it go at some point. I figure if it’s gonna happen, maybe I’ll be the one, the mediator.

Pierce added, “It left a bad taste in everybody’s mouth, no doubt. But at some point, you have to grow out of it. We’re out of the game now as far as me and Kevin [Garnett] and Ray. I’m over it. It happened then. It was a long time ago. But at the end of the day you have to realize, Ray helped this become what it was when we were here.” [CSN New England]

'The Big-3' would lead the way to the greatest turnaround in NBA history as the Celtics went 66-16 on their way to the franchise's 17th title, after winning just 24 games the season prior.

Even Allen can agree that despite some of the animosity between all parties since 2012, a bond still remains.


"It's been five or six years since I've been gone -- it seems like it was a year or two ago. I don't have any ill-will [towards anyone]," Allen explained. "When I left I was a free agent. You know, it's disheartening when you hear things negatively that people say about you because when you win; you're loved, like you love each other, families are close in proximity at all times. We won together, when you win together, you always share that bond -- that to me doesn't change." [ESPN]

Pierce has not spoken to Kevin Garnett or Rajon Rondo yet about burying the hatchet with Allen, but he remains confident that their title run, regardless of how they all felt about each other, will always be remembered as a time in their careers where they had a hand in returning the most storied franchise back to prominence once again.


“We’re going to be linked together for life, whether we like it or not,” Pierce said. “Eventually we have to let go.” [CSN New England]


Check out highlights from the Shanghai celebrity game below where Pierce finished with 34 points and 10 rebounds and Allen added 24 points and 15 boards.