Marcus Smart on his weight loss: 'I was tired, I wasn’t as explosive' 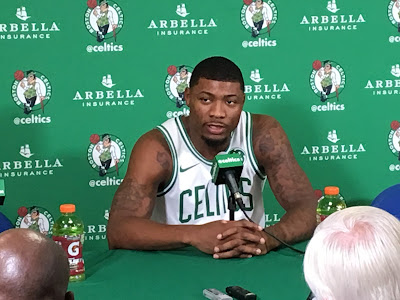 A noticeably slimmed down Marcus Smart spoke about his summer weight loss during Celtics media day.

The current longest tenured Celtic, talked about losing 20 pounds over the last three months and the reasons behind the change in lifestyle


“Looking at last season I was playing at about 240 [pounds] as a guard, and the reason I decided to lose [weight] was because throughout the whole playoffs I was having back problems,” Smart said. “Before games, during games, after games. It was hard for me to go to sleep.

“I remember times putting on my shirt and having to tuck my stomach in because I didn’t like the way it looked,” Smart continued. “I was tired. I wasn’t as explosive. I was exerting so much energy just to try and go out there everyday and do the things I’ve been doing my whole life, so I wasn’t too fond of that.”

Smart, who is down to his playing weight when he was at Oklahoma State (223 pounds), first spoke about his summer routine during a team charity event earlier this month, did confirm on Monday afternoon that the team did ask him to drop some weight.

Celtics president of basketball operation Danny Ainge was all smiles, as he is more than pleased with Smart's transformation.


“I credit Marcus mostly for wanting it and putting in the time,” Ainge, who also mentioned assistant coach Jay Larranaga as an impact in Smart’s training.

“He’s wearing his tank-top around, sometimes takes his shirt off," Ainge joked. “[We say] 'Marcus, put your shirt back on. We see the six-pack [abs], okay?' But seriously, it’s fun to see him. He’s got guys throwing alley-oops to him in pick-up games and when they have a time-out. That’s fun to see. I’m hoping that leads to a great year for him.”

Smart acknowledged he had to change his eating habits, so he's working with a chef, while eating Mediterranean food and avoiding anything fried, especially late-night fast food trips.


“Even now when I have my cheat days, I try to eat a burger or something, and it comes right back up,” Smart admitted. “My stomach is telling me, ‘We’re not doing that anymore. You need to get rid of that.’”

So what should we expect from the four-year veteran guard after a great offseason?


“More explosiveness, a lot more quickness laterally, and you’re gonna see me be able to guard the guards like John Wall and Bradley Beal and guys like that a lot better,” said Smart. “You’re definitely gonna see my energy level stay at a high rate. Last year with that extra weight, the first half I was energy, energy, but when the fourth quarter would come, I still had that mindset of energy, but my body wouldn’t allow me to do it.”

With the departure of defensive juggernauts Avery Bradley and Jae Crowder, Smart will be expected to pick up the slack on both ends of the floor as the team's best two way player, while second year swingman Jaylen Brown catches up defensively.


"I think it's going to change his game for the better," Brown said when asked about Smart’s weight loss. "He looks good. He's moving a lot faster, he's jumping a lot higher. It's kind of weird to see him like that. Like, just imagine you've seen him and now he's 25 pounds lighter and it's like 'Man, who is this guy?' He looks good, he's moving well and he's shooting the ball great. He's athletic...it's going to be a good year for him."