Report: Cavs' Isaiah Thomas could be out until All-Star break 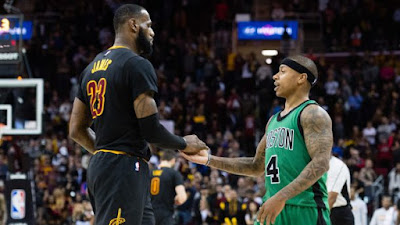 After coming to an agreement with the Celtics, it took over a week for the Cavaliers to eventually pull the trigger on the biggest trade of the offseason, involving Isaiah Thomas and Kyrie Irving.

The Celtics added their 2020 second-round pick to end the stalemate after the Cavaliers balked at Thomas' physical. But it turns out Cleveland has good reason to be concerned about Thomas' health (hip).

According to a report from The Athletic, Thomas could be sidelined as late as January or until after the All-Star break.


"No one is willing to put a timeline on when Thomas might return to the court. The fact he isn't running yet certainly is not a good sign," The Athletic reported. "One source with experience dealing with the type of hip problems Thomas is facing predicted it could be January or even the All-Star break before Thomas returns to game action. That doesn't leave much time for a new player to establish chemistry and rhythm with a team trying to compete for a championship."

This would be a devastating blow for the Cavaliers, a team that has been successful the past three seasons due to Irving's production alongside LeBron James. Thomas, who is a legitimate replacement for the loss of Irving, puts Cleveland in a tough spot if they're forced to play half of the regular season without him.


"Throughout these negotiations, there were those in LeBron James' camp who hoped maybe the Cavs would turn back from this trade with the Celtics, hang on to Kyrie Irving and bring him to training camp to give the team's two best players a chance to work out any differences." [The Athletic]

The Cavaliers will have to lean heavily on newly acquired point guard Derrick Rose, who signed a one-year deal worth $2.1 million with the club back in July. Rose, whose career has been plagued with injuries ever since his MVP season in 2011, turned in his best season in five years with the Knicks where he averaged 18 points, 4.4 assists and 3.8 rebounds in 64 games.

James, Kevin Love and the Cavaliers will look to build on that throughout the first half of the season before Thomas makes a full recovery.