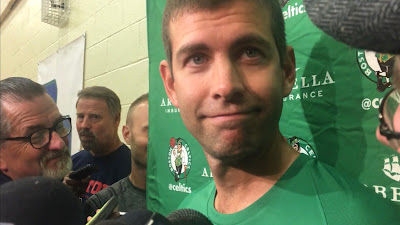 The Celtics have announced their 20-player training camp schedule as they begin to prepare for the 2017-18 campaign in Newport, Rhode Island.

Boston has 14 players under contract and two players signed to two-way deals. Below is the 20-man roster that Brad Stevens released on Tuesday afternoon, minus Marcus Morris, who will not be present until his current assault trial in Arizona concludes.

Danny Ainge will see what the Celtics have before making a decision on the 15th and final roster spot that opened up after the trade for Kyrie Irving. Camp invitees Andrew White, Devin Williams, L.J. Peak and Jonathon Holmes will join the 16 other Celtics players with guaranteed or two-way contracts for the next couple of weeks.

Andrew White signed a non-guaranteed deal in August after playing in the Summer League with the Cleveland Cavaliers. The swigman was not drafted after completing one season as a graduate transfer for Syracuse. He set the school single season 3-point record with 212 made 3's, while shooting 40-percent last year.

Devin Williams played three years at West Virginia before electing to go play in Australia after not being invited to the NBA Draft combine back in 2016.

L.J. Peak is a defensive wing out of the Georgetown University, who shot 40-percent from behind the arc during his sophomore year.

Jonathon Holmes has bounced around the G-League (formerly the D-League) since 2015, when he played for the Red Claws. The 6'9" forward was traded back to Maine on Sept. 25, and will have another shot to make the Celtics roster after playing four years of college ball at Texas.

The Celtics will remain at Slave Regina University until Thursday Sept 28, when they'll return to Waltham, MA to get ready for their first preseason game at the TD Garden against the Charlotte Hornets on Oct. 2.