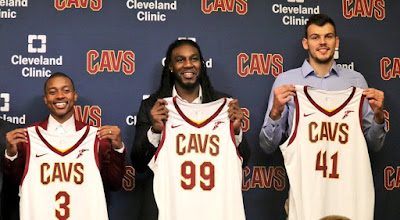 If it hadn't hit you yet that Isaiah Thomas, Jae Crowder and Ante Zizic are now members of the Cavaliers, Thursday's press conference where the former Celtics trio were officially introduced to the Cleveland media is just another reminder of how crazy the NBA's offseason has been.

Less than a week after Kyrie Irving and Gordon Hayward's introductory press conference in Boston, the Cavaliers held their presser despite many questions surrounding Isaiah Thomas' hip.


“It’s a great day for our franchise, adding these players to our team,” Cavs general manger Koby Altman said.

The blockbuster swap between the Celtics and Cavaliers lasted a total of 16 days from the initial trade back in August when Cleveland held up the deal with concerns of Thomas' injury, Boston would agree to send a second-round pick in 2020 (aside from the 2018 unprotected first-round pick in the original package) as compensation to complete the deal, to both teams holding their respective conferences days later.

After a very emotional Isaiah Thomas article/letter published by the Players Tribune that had gone viral just less than 24-hours before, the former Celtics All-Star has turned the page of his Boston chapter and is ready to write a new one in Cleveland.


“It was surprising, definitely caught time off guard,” Thomas said when asked about his initial thoughts on the trade. “It also woke me up. It made me realize this is a business and anyone other than LeBron James and Kevin Durant and those kinds of guys can be traded. I prayed on it, thought about it, slept on it, and I’m just thankful for this opportunity. I’m blessed to be traded to a situation where we could win a championship next year.

While Altman declined to get into any specifics on the status of Thomas' hip, he did acknowledge that moving forward on dealing with Thomas' injury is "a non-surgical plan."

Thomas, who averaged 28.9 points last season, led the Eastern Conferance in points per game and grabbed All-NBA Second team honors, has not set a timetable on his return.

For Jae Crowder, the trade was no less emotional as it came on the heels of losing his mother, Helen, who loss her battle with cancer at the age of 51, just moments after he was informed of the deal.


"There was a lot going on that day, obviously," Crowder told reporters in Cleveland. "The good thing about the whole ordeal was I was able to whisper it to my mom before she passed. I was with her. I just told her, 'We're going to Cleveland.' Five minutes later, she passed. That day was tough, but it was a good day for myself, for my basketball career, to move on to an organization like this, like the Cleveland Cavaliers, to put myself in a position to play for it all. I couldn't ask myself for nothing else. I was thankful for Boston, for everything they've done for me, and for trading me to a team like this. I was thankful for the opportunity. But that day was pretty wild."

What Isaiah Thomas and Jae Crowder brought to the Celtics and the city of Boston will surely not be forgotten in the near future and the best way to sum up what each were thinking when asked about how they felt leaving Boston after finishing first in the East a season ago, one look they both gave to one another as Thomas uttered three simple words

To view the full Cavaliers press conference, click on the video below