Paul Pierce on Kyrie Irving: 'He’s going to be the guy' 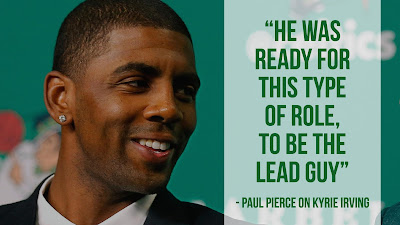 Paul Pierce knows a thing or two about being 'the guy' in a sports town like Boston. The former captain believes newly acquired Celtics All-Star Kyrie Irving is ready to step up and win now in green.

In a recent interview with Comcast SportsNet New England, Pierce was asked about Irving and what kind of impact he could have on the Celtics and the city.


"Kyrie can impact this team in a major way,” Pierce said. “You saw what Isaiah Thomas was able to do. A lot of people, even though Isaiah averaged more points, a lot of people believe Kyrie is a better scorer.” [CSN New England]

Thomas, who ranked third in the NBA in scoring last season at 28.9 points per game, was sent to Cleveland as part of the trade that brought Irving to Boston.

What makes Irving great is the fact the four-time All-Star could put up great numbers playing alongside LeBron James over the last three seasons.


“If you can average 25 points, 26 points and you got LeBron James on your team, that’s pretty impressive,” Pierce said.

While Irving played off the ball, more than a facilitator role in Cleveland, he will have two other All-Stars in Al Horford and Gordon Hayward to balance out being a great scorer versus creating shots for his teammates.


“He’s going to be the guy,” Pierce said. “He has championship experience. He’s still young and he’s got some other guys to play with.”

As for Celtics second forward Jalyen Brown and rookie Jason Tatum, they will benefit from having Irving as a teammate, a veteran with wisdom despite being only 25 years of age.


“He was ready for this type of role, to be the lead guy,” Pierce said. “He’s learned a lot under LeBron’s tutelage. He’s ready to share that with his teammates and possibly bring another championship to Boston.”

Speaking of Tatum, Pierce already sees a similarities to his own game, just a lot sooner than what 'The Truth' would eventually become.


“He looks like an older version of me, when I started doing the step-back and stuff,” Pierce said of Tatum. “When I’m watching him, he looks like a mature version of my game, like sixth, seventh, eighth year. He sees the defense. He knows what’s going to happen before it happens. He understands his position, footwork, his step-back (jumper) is there. His offensive repertoire seems complete.”

Pierce, a 19-year vet knows that what it takes to stick around the league other than having a great offensive game, something Tatum is already showing early signs of.


“The thing I see, what makes the guy special, there’s a lot of talent in the league. There’s no question about it,” Pierce acknowledged. “Your mentality, your drive, how great you want to be, that’s what separates the good from the great ones. You look at guys from the past, like Kobe [Bryant]’s determination, his competitive spirit. You see guys that were just as talented, they didn’t have the same competitive spirit so they could not reach the levels of other greats.”

Pierce concluded on Tatum: “The sky is the limit for that kid.”

The Celtics began training camp in 10 days and Pierce, who will have his No. 34 retired next February, will clearly be keeping an eye on the franchise he spent 15-years and helped raise a championship banner with, especially since he has a new gig as an NBA analyst for ESPN.