Kyrie Irving to join the Celtics: 'When Boston came knocking, I was answering' 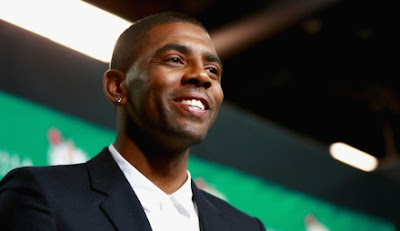 For Kyrie Irving, joining the Celtics was a no-brainer. It was an opportunity for a fresh start to play for a storied-franchise that is positioned to compete for a championship with him as its leader.

Irving talked about his initial feelings about the blockbuster deal after he was introduced for the first time as a member of the Boston Celtics.


"Once I knew that this illustrious organization had a chance to get me and talking to Danny and Coach Stevens, as well as Wyc (Grousbeck) and the rest of the organization group, it made sense," Irving said. "I was just waiting for it to finally happen.

"When Boston came knocking, I was answering," Irving added.

But after week's worth of delays, mostly due to the Cavaliers' physical exam on Isaiah Thomas, Irving wasn't sure if he'd get the chance to play for Boston. But that all changed earlier this week when he got the call from his agent.

Irving was in Atlanta on a set filming an Uncle Drew documentary, a character Irving played in a Pepsi ad earlier in his career, when he found out he was officially a member of the Celtics -- it was a moment he says truly meant a lot to him.


"I cursed probably twice, and then I ran out," Irving said. "I took a moment outside on the side of the street in Atlanta to watch the cars pass. I took in that moment, because it really meant something. It was the start of something new, and I knew I was going to come in contact with some great individuals, and we were going to go after something special."

Danny Ainge wouldn't go into detail about the week-long negotiating with the Cavaliers -- that ultimately ended with the Celtics adding a 2020 second-round pick to the deal -- he called them "private" despite various reports indicating that the Cavaliers were interested in first-round pick Jason Tatum. Another report suggested Cleveland was seeking other alternatives, such as a swap with the Bucks.

Milwaukee reportedly offered Khris Middleton and reigning rookie of the year Malcolm Brogdon but were reluctant to throw in their 2018 first-round pick, according to Zach Lowe of ESPN. However, a deal that included an unprotected 2018 Brooklyn Nets pick along with Jae Crowder, Ante Zizic, Thomas and a future second-rounder from the Celtics was too enticing for Cleveland to pass up.

It all worked out for both sides. The Cavaliers get a banged up, but still an elite scorer in Thomas, wing defender in Crowder, a prospect big man in Zizic and a first and second round pick while Irving gets to take on a new challenge in competing for a title as the face of the franchise.

Irving, who took the time out to thank the fans and Cavaliers organization in a heartfelt video that he posted last night, says it was time for him to welcome a new challenge -- one that will allow him to grow and reach his full potential as a player and as a person.


"It was my time to do what was best for me in terms of my intentions and that's going after something bigger than myself and being in an environment that was conducive to my potential," Irving explained. "That statement is self-explanatory because it's pretty direct in terms of what my intent is, and that's to be happy and with a group of individuals that I can grow with.

"That is not a knock on anything that has transpired in my six years (with Cleveland) because it was an unbelievable experience... Me leaving there wasn't about basketball. It was more or less about creating that foundation with me in Cleveland and now taking that next step as a 25-year-old evolving man and being the best basketball player I can be."

Although being the face of the franchise is how most look at Irving and the new-look Celtics, it's not perceived the same way for Irving, who quickly reminded the media that it's going to take a group effort for the C's to be successful and that there will be a lot of work to be done before the Brad Stevens-led team reach their goal.


"Is there ever such a thing as one player carrying a team? I don't think so," Irving responded when asked about the pressure of leading the Celtics.

He then went on to explain the importance of team basketball and what it means to play for coach Stevens.


"You've got a smart individual you can learn the game from and be taught at the same time while growing," Irving explained. "Who doesn't want to be a part of that? That's something awesome. I can share knowledge as well as gain knowledge as the same time from not only the player but the coaching staff and that starts with our head coach."

At the end of the press conference, Irving embraced his father, Drederick Irving -- whose number is retired at Boston University, and gave him his new jersey. Irving will wear No. 11 in honor of his dad, the same number that hangs in the rafters at BU.