Ray Allen reflects on sour relationship with the Celtics: 'If the team did what they needed to do to keep me, I still would have been there' 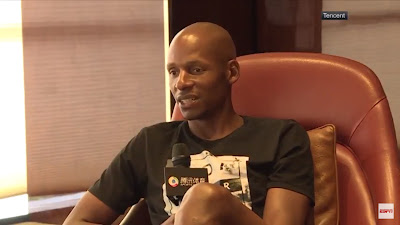 Although there's a good chance the rift between Ray Allen and his former Celtics teammates may be coming to an end soon, Allen still has a lot to say about the events that led to his 2012 departure from Boston.

For Celtics Nation, it certainly came as a surprise when Paul Pierce recently posted a picture on Instagram of him alongside Allen at an event in China with a caption that read "Time to get the band back together #burythehatchet... no matter what happened we all formed a special bond that can never b broken." It marked the first time a member of the 2008 Celtics championship team posed for a picture with Allen since 2012.

Time to get the band back together @trayfour #burythehatchet @tic_pix @rajonrondo no matter what happen we all formed a special bond that can never b broken #onceacelticalwaysaceltic
A post shared by The Truth (@paulpierce) on Sep 9, 2017 at 8:44pm PDT


However, in an exclusive interview with Tencent's (ESPN's partner in China) Lisa Hsu, Allen opened up about his relationship with his former Celtics teammates, why he left the Celtics to join their rival Miami Heat, and how his once great-turned-sour relationship with the Celtics organization ultimately led to him leaving.


"It's tough for the fans to understand, people who are in Boston, for me those are the hardest people to have to leave -- those are the greatest fans I've played in front of," Allen said. "No disrespect to any other fans but the difference -- the way they support the team at home and on the road and the way they follow the game was just a different element. But there's so much that goes on behind the scenes with teams and the players understand it and organizations understand it. But when I left -- what you know is that everybody on one side is going to say everything they need to say to make their side look like they did everything that they could to make sure that they made it correct for me. But from my opinion, I see something totally different. As well as any player that was traded or moved on.

"You have your issues, you have your needs that you have and it's up to the team to make sure that they -- in a free agency period -- take care of whatever issues you may have. If a team doesn't do that, then you have make sure you find the best situation that's available. That was probably the hardest, one of the hardest, decisions that I had to make because I didn't want to leave -- I didn't want to have to. The team almost put me in a bad situation so I ended up being where it wasn't that at the end of the day, it ended up being Miami or Boston, it just ended up being Miami or Boston -- that I was no longer going to be playing for -- the way free agency went at that time."

Without getting into specifics, Allen insinuated that his relationship with the Celtics brass was ultimately the tipping point -- he felt his needs weren't being met by the team and while fans felt he was disloyal, Allen felt that same sentiment towards his employer.


"[It] was sad to me, sad for my family because we're New Englanders, we live in Connecticut, we never wanna leave," Allen explained. "When I realized they weren't doing me any favors as far as keeping me, giving me any protections or guarantees of what was going forward we knew it was time for us to move on.

"That's the thing about sports -- you just move on, you just have to move on because teams do the exact same thing. When a team feels like you can't help them win anymore, they trade you and they try to figure out how they can leverage you for their future or for somebody younger, for multiple pieces. When teams do it everybody says, 'it's a business.' When I did it I was disloyal, and I was a traitor, and I did all these things. I always wanted to say that I loved where I was. If the team did what they needed to do to keep me, I still would have been there but they didn't and once I had to move it was time to go. Amongst the options that I had available I made a choice to go to the best option that was going to allow me to win a championship and it worked out 100 percent the way I had hoped it would work out."

Although the team was a lot different than what he was used to in Boston, Allen relied on his experience and work ethic to help his young teammates in LeBron James, Dwyane Wade and Chris Bosh. And as a member of the Heat, he went on to win his second title.


"Miami [was], you know, apples and oranges, it wasn't great -- we had a lot of things we had to work through and deal with," Allen explained. "We always said 'the grass is greener on the other side' but I know my work and I know what I need to do every single day to be ready, to be prepared and ultimately that's what I had to do. I was put in a situation where I had to -- long term, I had to -- help this team win a championship and it worked out. So now I have two rings and I'm proud of both of them for the work that I put in. I don't regret anything because everything that we do puts us where we are, you know. I learned a lot."

Despite various reports in and around Boston suggesting that Allen had friction with his former Celtics teammates -- specifically, point guard Rajon Rondo, at the time -- Allen says that wasn't the case at all and that his decision had nothing to do with his teammates.


"I haven't had any issue with anybody. I never have issues with people, it's never personal with me," Allen said. "When you sign up to play anything in any professional sport -- we're playing a game and that's ultimately what can't be lost sight of. The situation that all of us were in -- we were kind of brought there and put in this great situation and if it's not taken care of then you kind of lose it, you take it for granted, you lose it."

When asked if the picture of him signifies the past is "water of the bridge," Allen says that's a question he can't answer, given the fact that he's never had any harsh words for his former teammates.


"That's a conversation that has to be had with Paul because if you remember I haven't said anything negative about those guys in the last four years that I've been..."

Allen paused for a moment before realizing it's been a lot longer than four years since he was a member of the Celtics.


"More than four, it's been five or six years since I've been gone -- it seems like it was a year or two ago. I don't have any ill-will [towards anyone]," Allen explained. "When I left I was a free agent. You know, it's disheartening when you hear things negatively that people say about you because when you win; you're loved, like you love each other, families are close in proximity at all times. We won together, when you win together, you always share that bond -- that to me doesn't change."

Click the video below to watch Allen's full interview. He even mentions the Isaiah Thomas trade as an example of an organization trading its star player for the betterment of the team, but isn't ridiculed for it, nor labeled 'disloyal.'