Kyrie Irving on conversations with LeBron James: 'It's not anybody else's business' 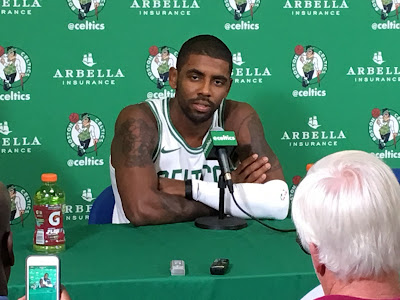 Whether Kyrie Irving truly believes if the earth is flat or not, the newest Celtics All-Star has most sports fans' attention in Boston every time he's opened his mouth over the last month.

Such was the case at Celtics media day in Canton, MA on Monday afternoon, when local reporters continued to dig deep into whatever 'relationship' existed or lack there of, between Irving and LeBron James while teammates in Cleveland.

If you watched Irving's appearance on ESPN's First Take a week ago and his response to questions regarding James, media day was no different for the former Cavalier guard on any conversations that took place between the two prior to Irving's trade demand out of Cleveland.

LeBron James, who broke his silence at Cavaliers media day about events leading up to Irving being traded for Isaiah Thomas, acknowledged he did what he could to help his former running mate.

James added on why Irving possibly demanded a trade: “I was wondering whether it was something I could have done better to make him not want to be traded," offered James. "Is it the way that the season finished? Or was it me coming back in the first place? Was it the coaching changes or the GM change?”

Irving didn't seem interested in responding or making public on any contact with James before the initial trade request or once he was dealt.


"I mean, if we ever have that conversation, I don't think it's for anybody else but me and him," Irving said during Celtics media day.

The Celtics star was asked if there was anything James could have done better over the last three years, especially last season.


"That's what I'm saying, even if there are things, it's not anybody else's business," Irving responded. "It's just really between two men. That's really where it is. As much as everyone here would like to hear that. That's between two men."

Now that the two 'foes' will be rivals this season in a weakened Eastern Conferance, James was asked about any advice he would like to offer Irving going forward.


“I have no advice for him,” James told Cleveland reporters with a smile. “If my son went to another team and asked for advice, I ain't giving him s**t.”

Both Irving and James will meet face-to-face sooner rather than later when the 2017-18 NBA season tips-off with the Cavaliers hosting the Celtics on TNT.

Will Irving take the opportunity to finally speak to James for the first time since being traded last month?


"Like I said, if it happens or not, I'm pretty sure you guys won't know about it," Irving said. "It's literally just about having the respect of two men, and having that conversation be respected. That's all."