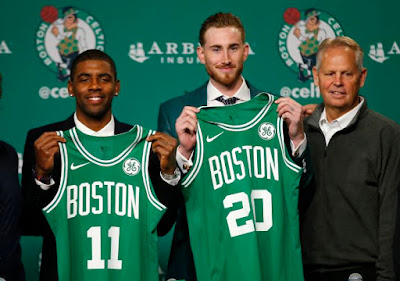 According to ESPN's Basketball Power Index (BPI), the Celtics have the best odds of knocking off the champion Warriors next season.

Although the Celtics are ranked fourth in the BPI projections, they're ranked first in the Eastern Conference, while the Rockets and Spurs trail the Warriors. With a 12.1 percent chance at winning the title, the Celtics trail the champion Warriors (57.9) by over 40 percent.


According to preseason BPI, the Warriors have a 58% chance to win the NBA title. The Bulls have a 19% chance for the top lottery spot. pic.twitter.com/9D7K1PkDr5
— ESPN Stats & Info (@ESPNStatsInfo) September 20, 2017


Without their best player in Kawhi Leonard -- who put together the greatest playoff season of his career last spring -- San Antonio was swept by the Warriors in the Western Conference Finals but much like every season you can't count them out. The Rockets, who are favored in the west to knock off the champs, have paired Chris Paul with MVP runner-up James Harden -- will make a lot of noise next season while attempting a 2015 Western Conference Finals rematch against Golden State.

In what was one of the busiest NBA off-seasons in recent history, a high volume of All-Star talent were swapped around, including players like Paul, Jimmy Butler and Paul George -- all of which were sent out to the Western Conference -- making the east is a bit lighter (in terms of individual talent) than it was one year ago. The west is stacked, paving the way for a projected Eastern Conference rematch between the Cavaliers and Celtics with the Wizards and Raptors lingering as a threat.

Surprisingly, the Celtics are favored in this ESPN metric despite the fact the Cavaliers still have the best player in the world in LeBron James on a team that only needed five games to knock off the Celtics last season. Obviously, the Kyrie Irving deal is being factored in here along with the anticipation of how Isaiah Thomas will bounce back from his hip injury.

But unlike the Cavaliers, the Celtics went through a dramatic makeover this summer. After losing 11 players, including Thomas, Jae Crowder and Avery Bradley -- three vital pieces of last season's starting five -- Brad Stevens has his work cut out for himself in finding a new identity for his revamped squad.

Of course, the Cavaliers will have to make up for the loss of Irving, however, adding two pieces in Thomas and free agent Derrick Rose, who is coming off of a renaissance-type season, isn't a horrible place to start. For the most part, the bulk of last year's roster is still intact.

Led by Kyrie Irving, Gordon Hayward and Al Horford, Boston will have to find continuity while relying on role players such as Marcus Smart and Marcus Morris, and youngsters like Jaylen Brown and Jason Tatum to fill in the blanks.