The 2017-18 NBA season is quickly approaching as the Celtics have released their Media Day and Training Camp schedule, which begins on Monday, Sept. 25.

The Celtics will have press conferences open to the local and national media live from High Output, Inc. in Canton, MA, with Brad Stevens, Danny Ainge and members of the new-look C's roster including Kyrie Irving, Gordon Hayward and Jayson Tatum.

Once Media Day ends, the Celtics will head as a team to Newport, Rhode Island to start training camp for the next three days at the Rodgers Recreation Center, off the Salve Regina University campus from Tuesday, Sept 26, to Thursday, Sept. 28.

On Friday, Sept. 29, the Celtics will return to their practice and training facility in Waltham, MA (HealthPoint), to prepare for their first preseason game on Monday, Oct. 2, against the Charlotte Hornets at the TD Garden.

See below for the rest of the Celtics preseason schedule before the start of the regular season, which opens up on Oct. 17, against the Cleveland Cavaliers 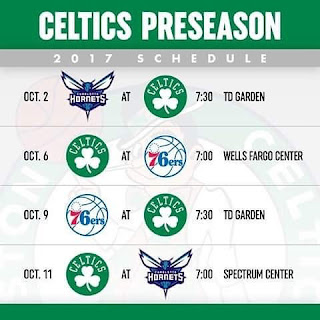