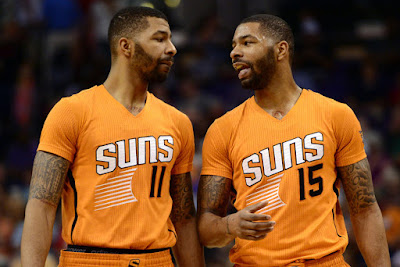 The aggravated assault trial is set to begin on Monday for the Morris Twins -- Celtics forward Marcus and the Wizards' Markieff -- in Phoenix and is expected to last 10-days, following the selection of an eight-man jury panel last week.

The Morris brothers face a maximum of four-years in prison if found guilty stemming from a five-on-one assault of 36-year-old Erik Hood following a high-school basketball game in Phoenix.

The Morris twins, who were Suns teammates at the time, and Gerald Bowman were indicted by an Arizona grand jury back in 2015. Both Marcus and Markieff have said that while they were at the game, but they had zero involvement in what transpired in the parking lot.

Two other defendants in the case, Julius Kane and Christopher Melendez, plead guilty to two counts of aggravated assault, according to court officials, sentencing is scheduled for Oct. 16.

Allegedly, Hood was confronted by the five men after sending inappropriate text messages to the Morris twins' mother before being kicked and punched repeatedly, said the authorities. Hood, who was once a friend and mentor to the Morris brothers, was beat unconscious, suffered a fractured nose, abrasions and a large bump on his head during the attack, according to the police report.

Hood says all five men jumped into a Rolls Royce Phantom and took off just as bystanders began to appear.

A conviction of the Morris brothers would also warrant disciplinary action from the NBA, resulting in a minimum 10-game suspension.

Marcus Morris, who was traded to the Celtics for Avery Bradley back in July, averaged 14.1 points and 5.1 rebounds for the Detroit Pistons last season. Markieff Morris will be entering his third season with the Washington Wizards.

The trial could disrupt their start of the 2017-18 campaign, as training camp is set to begin for both players on Sept. 26.