Who the Celtics could consider in Free-Agency 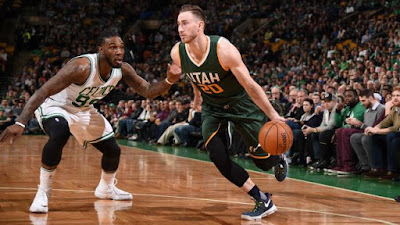 The Celtics have the third best odds to win the NBA championship next season and have the No. 1 pick in next week's draft.

While Danny Ainge still decides on whether to select Markelle Fultz (who worked out with the Lakers today) as the top overall choice or trade the first pick for an All-Star, it's clear that signing a top-tier free agent this summer is also on the C's agenda.

For weeks now, it's been reported that the Celtics have Utah's forward; Gordon Hayward as their No. 1 target come July 1, when teams can officially begin to negotiate with NBA free-agents. The Jazz All-Star is coming off his best season as a pro averaging 21.9 points (career-high), 5.4 rebounds and 3.5 assists.

Hayward is set to opt-out of his last year ($16.6 million) of a 4-year, $63 million deal he signed in the summer of 2014. The swingman could make upwards of $180 million if he were to stay in Utah for the next five years, while the Celtics, Heat or any other suitor can only offer $132 million for four years as a max-deal.

Clearly Hayward is the top free agent prospect this offseason since we all know that Finals MVP; Kevin Durant and last season's league MVP; Stephen Curry, will obviously re-sign with the NBA Champion Golden State Warriors this summer, barring some act of God that forces them both to look elsewhere.

Hayward is the guy the Celtics need to sign, but Ainge has to have a plan-B in his back pocket, if that 'Hayward-Stevens reunion' doesn't come fruition.

Here are a few options for this summer's free agent class Danny could consider.

Blake Griffin has shown some interest in heading east and Boston might be his next destination, as he too can opt-out of his final year of his contract worth $21.3 million for next season with the Clippers. His backcourt teammates; Chris Paul ($24.6 million, can opt-out) and JJ Redick (made $7.3 million) are set to get significant raises, but it could be somewhere else instead of La-La land.

Paul has said he will re-sign with Doc Rivers and the Clippers, the All-Star point guard knows he is not getting any younger and his window to make it to at least a conferance finals or beyond is quickly closing.

Did I hear someone say San Antonio?

Griffin has been injury prone for the last couple of seasons, playing in only 68 out of a possible 165 games since the start of the 2015-16 campaign, his last two postseason runs have also been cut short because of injury, which has hurt the Clippers each of the last two years (eliminated by the Blazers in the 2016 semi-finals and the Jazz in the first round this past April).

Maybe a change of scenery is what the 28-year-old forward needs to have a shot to play for a championship.

The five-time All-Star is averaging 21.5 points, 9.4 rebounds, 4.1 assists and a steal a game for his career, is exactly what the Celtics need in their front-court. But at what cost?

Is Griffin worth the risk even with his injury-filled past?

Despite being a high-flying, great passing big man, who rebounds the ball, theres been significant injuries that have plagued Griffin his whole career, such as a broken knee-cap (missed the entire 2009-10 season), a staph-infection (missed five weeks in 2014), a torn quad, followed by a broken hand (2015), knee issues (2016) and now a toe injury (2017) that will also require surgery.

Then again, when healthy Brad Stevens could find uses for a forward of Griffin's caliber, but the Celtics should proceed with caution if they choose to go this rout.

The All-Star (earned all four of his nods while in Atlanta), is very familiar when it comes to playing alongside Al Horford. The two former frontcourt teammates help put together a 60-win season with the Hawks, before being swept by the Cavaliers in the conferance finals in 2015.

Could it be different if Big Al and Millsap were to team-up in Celtics green?

Horford just turned 31, while Millsap is 32, not sure how much Ainge would be willing to pay to pair the two together again in Boston, but pretty sure the pending Hawk free agent is looking for his last big contract. The Celtics should look elsewhere if Millsap wants more than a three-year deal at the most (similar to his prior 3-year, $59 million deal with Atlanta).

Danilo Gallinari is a 6'10'' small forward, who can shoot 3's and rebound. The Nuggets' free agent is coming off his healthiest campaign in four seasons, averaging 18.2 points, 5.1 rebounds, 2.2 assists while shooting over 90-percent from the free throw line in 63 games played.

The best part about Gallinari is that he is 28-years-old and after making $15 million last season and his injury-filled past, he shouldn't command high-dollars (maybe in the ball-park of a two-year, $30 million range). He'd be a great-fit in Stevens' offense, especially as a sixth-man if the Italian finally wanted to play deep into the playoffs (currently only has played 12 postseason games in his career).

Other honorable mentions include:

If the Celtics don't make a splash in this summer's free agency pool, Ainge most likely will have just his own free agents of Isaiah Thomas, Avery Bradley and Marcus Smart to worry about in 2018 to try and re-sign.

With Paul George declaring to head to Los Angeles in order to save the Lakers (maybe with LeBron) and DeAndre Jordan being a one trick pony, who will opt-out for another payday and there's clearly no interest from Stevens or Ainge in the least bit for DeMarcus Cousins a year from now.

Looks like the Celtics would have slim pickings to attempt to spend their money on more so next year than right now, if they are unable to sign Hayward or Griffin. They would probably be forced to make a trade to improve their roster, who's fresh off a trip to the Eastern Conferance Finals

Either way, it should be interesting for Ainge as he'll attempt to throw his free agent fishing rod to see who he can reel in come next month.