Report: Celtics in deep trade talks with 76ers of No. 1 pick 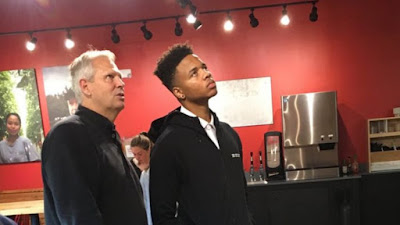 With the NBA Draft less than one week away, the Celtics' No. 1 pick could be dealt sooner than anyone anticipated.

Adrian Wojnarowski of The Vertical dropped his first Celtics #Wojbomb of the off-season when he tweeted out that the 76ers are in deep trade talks with Boston over the No. 1 pick in exchange for a packaged deal that would include Philadelphia's No. 3 pick and a future first-round pick. According to sources, the 76ers are reportedly waiting on Markelle Fultz' medical information and will continue talks shortly afterwards. Happy

Boston would acquire Sixers No. 3 overall pick in 2017 and package to include future first from Sixers, sources say. https://t.co/AK5LyYXnYX
— Adrian Wojnarowski (@WojVerticalNBA) June 16, 2017

The news broke less than an hour after Sean Cunningham of ABC10 Sacramento reported that Kansas star Josh Jackson, a top-5 prospect in this year's draft, had a private workout with Philadelphia Friday afternoon and plans to have another with the Celtics within the next few days.

It's going to take a lot for the 76ers to land the No. 1 pick but Philly is certainly one of the very few teams willing to part ways with their assets in order to pull it off. Future first-round picks from a lottery team such as the 76ers is always music to Danny Ainge's ears.

Woj also added that the talks between Boston and Philadelphia are so serious that Fultz could be meeting with the 76ers as soon as this Saturday.

Deal talks are far enough along that Fultz could be on his way to Philadelphia for a meeting Saturday, sources say. https://t.co/kR8vwZu8i2
— Adrian Wojnarowski (@WojVerticalNBA) June 16, 2017

Fultz, who met with the Celtics last week, was blown away by the organization along with the city. The 6-foot-4 guard left the city feeling he was destined to wear green and white, he said, while Ainge had nothing but good things to say about the potential No. 1 pick. However, if there was one thing that stood out the most about what Ainge's had to say about Fultz it was definitely the "I didn't find anything today that I didn't already know" part.

Ainge went on to say that it's not uncommon for him and the organization to not find out something new after a prospect's workout. But with the logjam of guards in the Celtics' back court and a tempting packaged deal from Philly that could include a rotation player, this year's top-3 pick and a potential future top-5 selection, it could be enough for Ainge to pull the trigger on a deal before draft night.