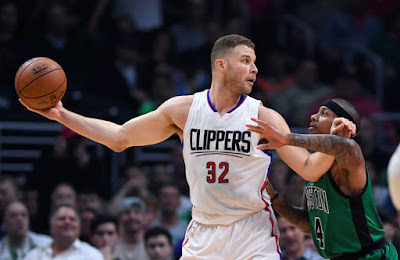 Minutes after it was announced that Doc Rivers and the Clippers reached a blockbuster deal sending Chris Paul to the Rockets in exchange for a boatload of players, a future first-round pick, and cash, Isaiah Thomas reverted to once again using his social media platform to recruit a free agent to Boston.

Thomas commented on Slam Magazine's Instagram post on Wednesday, turning Twitter into a frenzy and leaving many to speculate if the 5-foot-9 All-Star would prefer to see the Celtics target a big man in free agency, rather than signing Gordon Hayward. Under a photo of what has been the Los Angeles' core -- Paul, DeAndre Jordan and Blake Griffin -- for the past six seasons, Thomas commented "Helluva run. Now Blake come on over to Boston lol." 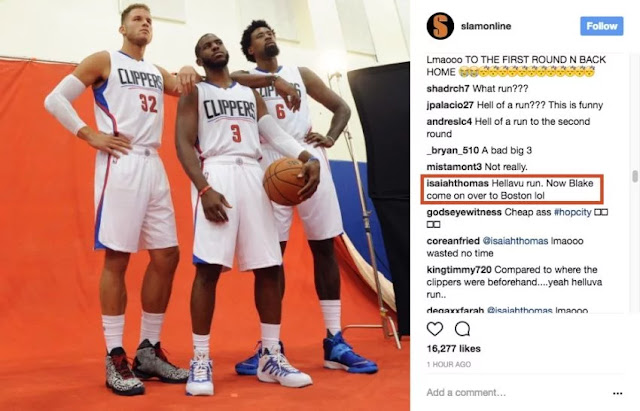 Now that he is a member of the Rockets, Griffin could have more reason to leave Los Angeles. But don't assume Thomas is only sold on the idea of seeing Griffin in green, he also liked a picture of Hayward and Paul George alongside him and Al Horford that was posted by CSNNE's Instagram account.


So, who knows if he has a preference. It seems like Thomas just wants to see the Celtics acquire a team-changing player in one way or another.

Since his first offseason as a member of the Celtics back in 2015, Thomas has taken it upon himself to be the 'recruiter' of the franchise -- a role he said Danny Ainge instilled in him at the end of the 2014-15 season.


"I think I'm pretty good at it," Thomas said. "Even in college, man, when guys came on visits, I was the guy they were hanging around with all weekend. So when Danny [Ainge] came to me [about recruiting], it was easy for me to say 'Yeah, I could try to do what I can.' I know it's going to be tough, but I can do what I can and tell people about how nice Boston is."

That summer he made subtle posts about DeMarcus Cousins and Kevin Love and last year it was the infamous Kevin Durant-inspired "#35" with a shamrock emoji post.

Either way, the Celtics are certainly in the mix to potentially lure in a top-tier free agent to come to Boston and regardless of who that player is you can expect to see Thomas being very active on his social media accounts between now and the end of next week.