LaVar Ball on Fultz: 'I think Markelle is a better fit in Boston' 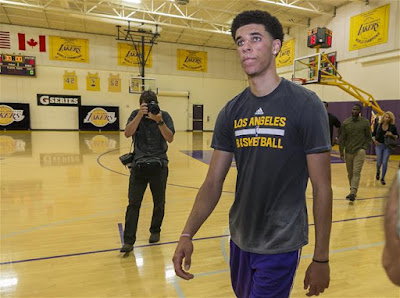 LaVar Ball has made it clear that he hopes to see his son, Lonzo Ball, wearing a Lakers hat at this year's NBA Draft on June 22.

And explained why he thinks top prospect Markelle Fultz is a better fit for the Celtics than his son.

LaVar recently made an apperance on the CSN CelticsTalk Podcast where he explained why Lonzo would fit in better in Los Angeles due to the Lakers' lack of leadership, whereas the Celtics, according to LaVar, don't necessarily have that problem.


"Team-wise, the Lakers are a better fit," LaVar Ball explained on the CSN CelticsTalk Podcast with Kyle Draper and A. Sherrod Blakely. "They (Lakers) really don't have a leader. Boston already went to the playoffs. They have a leader.

"I think Markelle is a better fit in Boston," Ball said. "He's more of a scoring guy."

With All-Star Isaiah Thomas handling the point guard duties for the Celtics, Lonzo would most likely have to slide over the shooting guard position if the Celtics were to draft him at No. 1. But he isn't as comfortable there, according to LaVar.


"Check it out; you're gonna have the ball in Isaiah's hands or the other guy's hands and Zo could possibly slide over to the two at some point. But he's a one (point guard)," LaVar said. "So just as a pure fit, you really wouldn't know who's team it is if he's in Boston."

However, things would be much different in Los Angeles.


"Now going straight to the Lakers, they're super-young," LaVar said. "It's Lonzo's ream; that's my opinion of it. Everybody else might think about it differently or something. But I'm just being realistic and thinking about it. He would be a better fit with the Lakers instead of Boston because (the Celtics are) already established and on their way up."

From a basketball standpoint, LaVar makes a valid point and luckily for him, the proud father of a top NBA prospect, it conveniently coincides with what he's envisioned for a very long time.


"It's just my belief... I kind of feel this is lined up a long time ago," LaVar explained. "And not saying that Lonzo wouldn't play for the Celtics. I just had this vision of my boy playing for the Lakers (a long time ago) and I'm just going to speak it into existence."

LaVar, who grew up a Lakers fan, would see it as a dream come true if his son were to wear purple and gold. However, seeing his son being draft into the NBA will be an honor no matter which team takes him, he says.


"If it doesn't happen, I won't be like, 'goddangit, ah man, life's over," LaVar explained. "Zo's main goal was to play for the NBA; to get to the NBA. Whatever team he plays for, is fine. Now we go on... let's say you have a dessert. And your preference is chocolate cake. But if you bring me an apple pie, I ain't gonna send it back. It's the same thing. He's still gonna play so we're good. Dessert is dessert; NBA team is an NBA team. But if he has a choice and can pick one, I ain't gonna be afraid to pick one."