Paul Pierce: Kevin Durant 'may be the best player in the world today' 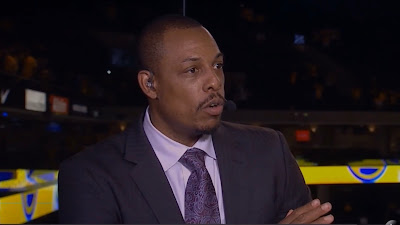 Former Celtics captain Paul Pierce has never been shy when it comes to speaking his mind. The future Hall-of-Fame inductee has blessed us all as an ABC/ESPN analyst for a second consecutive year during the NBA Finals between Cleveland and Golden State.

Though technically considered a guest commentator during pregame, halftime and postgame of each televised broadcast throughout the Finals, Pierce has been a joy to watch especially from the Boston sports fan perspective.

'The Truth' made, what possibly might be the boldest statement of the NBA postseason thus far when he spoke about Kevin Durant in the Warriors' 132-113 Game 2 win over the Cavaliers.


"He may be the best player in the world today," Pierce said after listing Durant's accomplishments and box score stats through the first two games.

The claim drew an immediate knee-jerk reaction from his colleagues, who believe that crown still belongs to LeBron James. Chauncey Billups asked what was Pierce drinking out of his mug.

Despite Billups disagreeing with Pierce's statement about Durant being the best in the league, he continued to praise the Warriors forward, noting how he's improved on the defensive end this past season.

Check the full video below:


Paul Pierce then joined ESPN's 'The Jump' on Monday to defend his comment about Kevin Durant, only to be received with resistants once again despite giving LeBron James his props.


"I love LeBron, he's one of the greatest of all-time," said Pierce. "I'm not a LeBron hater, I thought the Cavaliers were going to win last year, I said LeBron is the best player. What he's done, seven straight Finals [appearances] is unprecedented, I'm not taking anything away from LeBron. He's one of the greatest players of this generation, I'm glad to say I got to play against him. It's just that right now, Kevin Durant is the best player in the world."

Stephen Jackson would only go as far as agreeing with Pierce to a certain extent, but wouldn't go any further by saying Durant has surpassed James as the best player in the game today.

So far Pierce seems to be enjoying his time away from the game of basketball while still providing basketball knowledge, who knows maybe this is an early sign of his next gig after his No. 34 gets retired next season in Boston.


The Warriors are up 2-0 over the Cavaliers with Game 3 on Wednesday at the Quicken Loans Arena. It's clear that Pierce should be prepared to back up his claim about Durant once again, no matter the outcome.

Until then, enjoy Pierce dropping some more "truth" below: