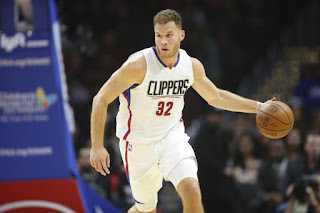 With free agency season just around the corner and plenty of cap space, the Celtics plan to pursuit top-tier players who can turn them into title contenders next season.

According to Adrian Wojnarowski, who was on Yahoo's The Vertical Podcast, the Clippers and others believe the Celtics plan on courting Clippers forward Blake Griffin.


"Blake Griffin, and I think the Clippers may think this too, and certainly some other teams, Boston is really the danger for Blake Griffin," Wojnarowski said on the podcast. "I think Boston's two primary free-agent targets right now are [the Utah Jazz's] Gordon Hayward and Blake Griffin. Now they're not going to get both of them, but they're both players who would potentially have interest there, and who Boston I think looks at in different ways with their future."

Griffin, 28, can become an unrestricted free agent this summer and sign a max-deal worth $175 million to stay in Los Angeles -- a team that's going to have to decide if they're ready to part ways with their core players. Much like Griffin, starters Chris Paul and JJ Redick can also sign with another team this summer.

One of the biggest reasons why Woj believes Griffin would seriously consider signing with the Celtics has a lot to do with his last visit to Boston. The five-time all-star got a first-hand look at how the city showered Paul Pierce with appreciation on Super Bowl Sunday this past February when Pierce played his final game in the city he helped raise its 17th NBA title.


"So the one thing to know about Blake Griffin, he was [in Boston] when Paul Pierce came in with the Clippers for his last game in Boston, Blake was obviously there with the team. He saw how Boston reacted to Paul Pierce and what it means to have been a great player in Boson," Wojnarowski said. "Now, Blake doesn't have enough left in his career to be beloved and be the all-time Celtic that Paul Pierce was, but it does give you a sense -- and I know it gave Blake a sense, it did not go unnoticed with him -- about how that building and that city and the way they loved Paul. And I'm sure Paul being around the last couple years with him, I'm sure they discussed it."

The most the Celtics can offer Griffin is $130 million on a four-year max deal. So theoretically, if the Clippers decide to give him a max extension, there's a good chance he will stay in Los Angeles. It's all up to Doc Rivers and co.


"But they're certainly a threat too in this," Woj explained. "But I just think the Clippers are a unique situation because you talked about what it's going to cost to keep together Golden State and Cleveland; it's another thing to pay this money to keep a Clipper team around that hasn't achieved yet. It is a lot of money to go where they need to go to pay all these guys and say to yourself, 'This team hasn't even been out of the second round yet.'"

For the third consecutive season, Griffin played fewer than 68 games throughout the 2016-17 season. He averaged 21.6 points, 8.1 rebounds and 4.9 assists for the Clippers last year.