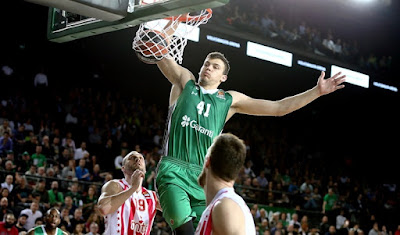 Ante Zizic believes he's ready to join the Celtics next season, and will spend his entire summer preparing for the 2017-18 NBA season.

The Croatian center who was drafted with the No. 23 pick in last year's NBA draft, will not be playing for his country during the upcoming EuroBasket tournament, according to ESPN. Zizic is expected to join the Celtics at the Utah and Las Vegas Summer League, respectively, in July.

Although the summer leagues will take place before the EuroBasket tournament (Aug. 31 to Sept. 17), the tournament could interfere with Celtics training camp. Therefore, the Celtics prospect is expected to skip it.

The 6-foot-11 center will look to provide the Celtics with rebounding and plenty of size in the front court and at age 20 Zizic still has plenty of developing to do but has a decent shot at making the Celtics roster.

With starting center Amir Johnson expected to not return with the Celtics and free agent Kelly Olynyk's uncertain future with the team hanging in the balance, he will look to take advantage by fighting for an opportunity.

Zizic finished the 2016-17 season playing in Turkey with Darussafaka Dogus Istanbul. He averaged nine points and 6.7 rebounds in 21 Euroleague games.