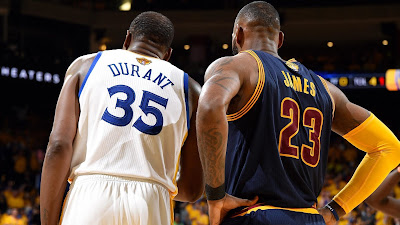 First and foremost I want to preface this piece by stating that I believed the Cleveland Cavaliers were not only going to win the NBA Finals against the Golden State Warriors, but I predicted that LeBron James and company were going to hoist the Larry O'Brien trophy in six games.

You can listen to my 'hot take' about this 'Trilogy Finals' on the latest episode of the Causeway Street Podcast (shameless plug 😉 ), where I honestly thought that Kevin Durant and the Warriors were going to bow down to the Cavaliers, while most choose Golden State in six or seven games.

I made my pick based on how James (barring Game 3 in the ECF) had performed throughout the Eastern Conference playoffs averaging 32.7 points, 8.1 rebounds and 7 assists, while shooting 56.6 percent from the field and the Cavaliers went 12-1 in 13 playoff games leading up to the Finals.

Despite much criticism from analysts that the East 'was too weak,' I couldn't help but notice that James was clearly focused to meet up with the Warriors in the Finals, plus the Cavaliers looked like they had turned on that 'switch,' seamlessly playing cohesive basketball and everyone knew their role and the ultimate goal at hand.

Simply put, Cleveland looked like the defending champions that they were at the start of the regular season. Back when they were steam rolling through opponents and their 'Big-3' was playing better than they ever have since joining forces in 2014.

With that being said, I truly believed that Cleveland was more than prepared to face Golden State this time around than they were a year ago.

While adding a seven-footer like Durant was a huge upgrade over Harrison Barnes at small forward for the Warriors, he was only 4-14 against all-time against LeBron, including the Finals back in 2012. Not to mention I felt like KD choked against the Warriors when he was in Oklahoma City, being up 3-1 during the 2016 Western Conference Finals only to lose in seven and then took his talents to Oakland.

After Games 1 and 2 of this year's Finals I was starting to question the greatness of LeBron James (something I haven't done since before Game 6 of the 2012 ECF in Boston), while possibly witnessing the changing of the guards when it comes to the best player in the NBA as Durant played flawlessly in front of his home crowd.

But now, after the 3-pointer dagger heard around the world made by Durant in LeBron's face at Quicken Loans Arena on Wednesday night in Game 3 to help the Warriors take a commanding 3-0 lead in these Finals, has proved to me that Paul Pierce's statement after Game 2; that Durant 'may be the best in the world,' is not that far-fetched.

Am I ready to say Kevin Durant is a better basketball player than LeBron James at this point in time?

No, not quite, but Durant is making a damn good case as he's been the best player in this series by far, averaging 34 points, 56 percent from the field (52.5 percent from the 3), 10 rebounds, 6 assists, 2 blocks and 1.3 steals through three games.

James, despite averaging a triple-double of 32 points (55.7 percent from the field), 12.3 rebounds, 10.3 assists 1.3 steals and 1.3 blocks through three games, should be considered the second best player in the these Finals, in my opinion.

On paper one might say LeBron technically should be looked at as the best player in this series when you look at his stats, but making clutch plays when it matters most to win games, has been the difference maker and ultimately why Durant and the Warriors are one win away from grabbing an NBA title.

So why would it fall on LeBron when the Cavaliers ultimately lose this series against Golden State?

For those that haven't noticed these last three games, James has reverted back to the passive 2007, 2010, 2011 and 2014 LeBron, where he's not taking advantage of opportunities to take over a game, refusing to guard the Warriors' best player (Durant) at various moments, turning the ball over at a high clip (averaging 5.6 turnovers per game) and not wanting to even attempt many shots in the fourth quarter (11 total points for the series to Durant's 31).

Would Jordan ever not take over a game in the NBA Finals if he saw a chance to, since that's such a hot debate when it comes to who's the better player?

The answer is: No.

Jordan wouldn't turn the ball over eight times like James did in Game 1 and Mike wouldn't just roam while the opposing team continued to get easy layups while also going scoreless in the last two minutes of a crucial Game 3, where the Warriors went on a 11-0 run and beat the Cavaliers.

While James went under the 3-point line to somewhat contest Durant's game winning 3-ball with 45 seconds left on Wednesday night, that was probably the most weakest show of one-on-one defense on someone that is shooting well over 50 percent from behind the arc I've ever seen from a great player that is considered a 'better defender than Jordan.'


"I give everything to the game...I lay it all out on the floor," said James after Game 3. "I did that tonight, I gave everything that I had mentally and physically. Obviously, I'm drained right now and ready to get home."

Clearly, James' 'best' has not been good enough, and if he continues to just play without a sense of urgency, he'll stay at home come Friday night after the Warriors celebrate another championship on his home floor.

Last year, when Cleveland trailed 3-1 to the Warriors, James took it upon himself (along with Kyrie Irving's 41 points in Game 5 and, 3-point dagger in Game 7) to have three memorable performances of scoring a combined 109 points in Games 5, 6 and 7 (including back-to-back, 41-point scoring outings) to do the impossible and win Cleveland a championship.

James reminded everyone that he was still the best player in the league and the world after he averaged 36.3 points (50-percent overall shooting from the field), 11 rebounds, 9.6 assists, 3 steals, 3 blocks and 3 turnovers through those last three games, while you could sense he was going all in, he was on a mission.

You would imagine after what James went through in the first four games last June against the Warriors (24.7 points (47.5 percent shooting), 8.2 assists, 11 rebounds, 2.2 steals, 1.7 blocks and 5.7 turnovers) and how he responded when his back was up against the ropes, he'd know exactly what it takes to beat the Warriors, regardless of Golden State adding Kevin Durant or not.

But this time around I guess "it's just basketball" at the end of the day, according to arguably 'the greatest of all-time,' who's still chasing that No. 23 ghost, if you believe James and his words.

So what do I say to those that claim 'it's not on James, it's his supporting cast, who are not coming through in this series?'

Last time I checked it was Bron-Bron who lobbied for Tristian Thompson and J.R. Smith to get signed by the Cavaliers at $82 million and $56.8 million respectively James wanted another 3-point shooter in Kyle Korver, and Cleveland made Mo Williams come out of retirement to trade him and Mike Dunleavy to Atlanta to acquire him.

After a 126-91 Cavaliers' road loss to the Warriors in mid January, LeBron would say that his team was not good enough and they needed another playmaker.

Enter Deron Williams, a veteran point guard, who could run the offense while Kyrie Irving would rest or better yet, both play together at the same time.

It was LeBron who wanted Kevin Love instead of a young more athletic Andrew Wiggins two seasons ago, so what do I say to those blaming the Cavs' role players for not making an impact in these Finals so far?

G.M. LeBron orchestrated this team and you reap what you sow, as far as I'm concerned.

Pat Riley is somewhere lighting a cigar and smiling at the fact that he didn't agree to James' demands like the Cavaliers have during both stints. Back in 2014 LeBron knew that the Heat were not going to go crazy and spend massive amounts of money on better role players after getting beat 4-1 to the Spurs in the Finals. So LeBron did the only thing that would benefit him, go back home and build another 'super team.'

Only now, he has no one to blame but himself for this 2016-17 Cavaliers team imploding, he even got the coach he wanted in Tyronn Lue, while no one has seen or heard from David Blatt over the past 18 months (for the record he's coaching Celtics draft and stash center Ante Zizic in Turkey, but I bet you didn't know that).

So the bottom line is whether the Cavaliers get swept or not is irrelevant, but losing in this series is unavoidable, especially with the cool, calm and collective James not wanting to truly be great.


"I said it after we won the Eastern Conference finals that we're getting ready for a juggernaut," James said. "It's probably the most, most firepower I've played in my career. I played against some great teams, but I don't think no team has had this type of firepower."

After it's all said and done in the upcoming days, Kevin Durant will be 1-1 in the Finals and on the verge of knocking that crown off of LeBron's residing hairline head, and while his decision to join the Warriors will always be questioned, one thing is for certain; Golden State needed KD, not the other way around.

Durant recognized LeBron's formula of forming a 'super team,' a precedent 'King James' set almost a decade ago, but KD tweaked it by not having to recruit anyone. All he had to do was join a roster that was already a proven winner. Not that I agree with it, but Durant embraced that villain role better than the current 'best player in the world' ever did

The Warriors saw they couldn't beat James and a healthy Kyrie Irving in seven games so they made sure to maximize their talent so there would be no excuses and a year later they're on the cusp of going 16-0 in the postseason; something that has never been done in NBA history.

On the flip-side there's already talks of who the Cavaliers can trade Smith, Love or Thompson to improve their roster.

Worst, there's even rumors of Bron-Bron possibly leaving 'The Land' before the end of his prime to possibly win another title elsewhere, imagine that?

The last time I recall, Jordan never intervened when it came to changes made to the Bulls' roster or even contemplated leaving Chicago to team up with friends to try and chase rings.

But then again, you already knew that.