Markelle Fultz on his trip to Boston: "It's almost like I belong here" 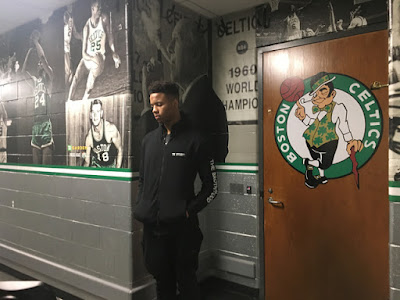 Markelle Fultz capped off a two-day visit to Boston with a tour of the TD Garden, which included a up close look at the Celtics locker room and the 17-championship banners hanging from the rafters.

"There's a lot," Fultz said with a smile as he studied each banner. He joked how he used to play as Kevin Garnett, Paul Pierce, Ray Allen and members of Boston's 2008 title team in the NBA 2K series as a kid.

Now there's a chance he could actually wear Allen's No. 20 next season if the Celtics decide to draft Fultz as the No. 1 overall pick two weeks from now.


"I would want to wear No. 20, just because a lot of history behind that number, through high school and college," Fultz said. "[But] it doesn't really matter about the number; it matters about what I do."

The potential No. 1 NBA Draft pick made his first trip to Boston while meeting with Danny Ainge and the Celtics brass, plus worked out for coach Brad Stevens at the C's practice facility in Waltham.


"It almost feels like I belong here," Fultz told ESPN's Jeff Goodman during a stop outside the Celtics' locker room, where the former University of Washington star admired pictures of Boston legends in the hallways.

The Celtics finished their season with a record of 53-29 and as the No. 1 seed in the East, only to win the NBA Draft Lottery with the top overall pick, thanks to a 2013 draft night trade of Paul Pierce and Kevin Garnett to the Brooklyn Nets.

Fultz was asked if the Celtics ever mentioned that they would choose him as the No. 1 pick on June 22, but the 19-year-old said that conversation was never brought up.


"No, no, no, they didn't say that. They didn't put that out there. I gotta earn everything," Fultz said. "Just talking to them, we didn't really talk about me getting drafted or anything like that, but more about me being a better young man, no matter where I go. Just what's going to make me the best player I can possibly be." [ESPN]

Boston has previously used two-picks from the Nets in 2014 (James Young at No. 17) and 2016 (Jaylen Brown at No. 3) as part of their blockbuster trade from four years ago, while the C's have the right to swap draft spots this season, they will also own Brooklyn's pick in 2018.

Fultz arrived in Boston on Monday, where he went through a series of medical examinations and meetings, followed by a solo workout and film session with Brad Stevens on Tuesday.

"My visit here was great. It was a good experience," Fultz said. "First of all, I came here, did some medical stuff at the doctors, a physical. I went out to eat later that night [with Celtics president of basketball operations Danny Ainge], that was a good experience just seeing the food culture here, got a good burger.

"Today, just being able to go up and have a blessed opportunity to play the game of basketball, first of all, then just working out for the Celtics, being able to work out, and show them what I have and at the end we did a nice little conditions test, the three-minute run, and just sitting down and watching game film, and film of myself, and how the team plays defense and offense and just learning more stuff about myself from film. Now, just coming to see the arena, and the city, it's just unbelievable." [ESPN]

An ESPN report stated that Fultz is still undecided if he will work out for any other team, but that could change according to the former Washington freshman.

Ainge's take away from the solo work out, without getting into too many details on Fultz's performance and personality in the 24-hours he spent with him, was nothing short of positive.


"He's talented," Ainge said. "I didn't find anything today that I didn't already know, which is the same case with almost every draft workout. ... He has a personality, has some charisma, he's fun." [ESPN]

The biggest question that remain for Celtics fans is can Fultz and Isaiah Thomas play together? Fultz believes that the bound they share as being products Washington, will only help them thrive in Stevens' system

Of course, while taking his tour around the Garden, Fultz was asked if he could envision playing in front of the great Celtics fans


"I think it would be good if I come here." he said. "The fans here are great. I think that energy is just going to carry over to how I play on the court and just give me a little boost of energy."

Fultz added about watching Celtics games during this year's playoff run: "You can definitely hear it on TV, too. When I was watching and you can just see how excited everybody was and everything like that." [ESPN]

While Fultz has no idea if the Celtics will take him as the No. 1 pick at the draft in a couple of weeks, Ainge and Stevens have left a great impression on him as they discussed topics outside of basketball.


"It's crazy. I think it's a great organization," Fultz said. "They really care about you, on and off the court. They really just want the best for young men and people like me. They told me stuff I need to work on, they told me stuff that was good. I think that's the biggest thing, just helping me grow on and off the court, it's always what I've been about and I think that's special." [ESPN]

So with this two-day visit in the books for Markelle Fultz, does the decision get any easier when it come to what Ainge has in mind come draft night?


"It helps us to get to know more [about the player]. Sometimes it makes [a final decision] harder, sometimes it makes it easier," said Ainge. "I don't know, we're not done. We're still in the process. We still have other players to see. Time will tell." [ESPN]