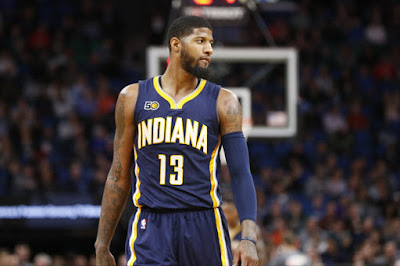 It's so high that if the Celtics aren't willing to part ways with their most-coveted first-round draft pick that's sitting in their treasure chest of assets, then they can wave goodbye to the possibility of landing their biggest star since Kevin Garnett.

According to Mark Murphy of the Boston Herald, the Pacers are asking the Celtics for two starting players and Boston's 2018 first-round picks from Brooklyn and the Lakers. It's a demand the Celtics consider "unrealistic" for George, Murphy says.

The C's are expected to target either Gordon Hayward or Blake Griffin before trading assets and two of their best players, assuming the two players involved are most likely Jae Crowder and Avery Bradley, to Indiana. If Boston manages to land either Hayward or Griffin -- both projected to sign for max dollars -- they will have to shave off Bradley's $8.8 million contract in order to make room for George's $19.3 million expiring deal.

But with no guarantee that George will stick around past next season, demanding next year's Brooklyn pick -- which is most likely going to land in the top-3 range -- is a bit absurd. Crowder and Bradley, along with a potential top-5 pick from the Lakers is a solid exchange for an All-Star player who has already vowed to leave the Pacers by the end of next season.

And according to Adam Kaufman of 98.5 The Sports Hub, the Celtics offered the Pacers the Lakers first-round pick and the 2019 Grizzlies or Clippers' protected first-rounder along with Crowder, possibly Bradley and a money filler.

If I had to guess, this reported deal is probably the most the Celtics are willing to put on the table for George. But either way, first thing's first -- Boston will meet with top-tier free agents before making any deals with the Pacers, Danny Ainge will eventually cross that bridge when he gets there.