Danny Ainge, Celtics draft Jayson Tatum at No. 3, the prospect they wanted all along 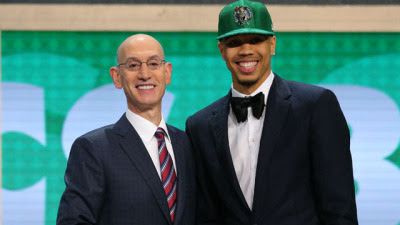 The Celtics didn't make the blockbuster deal that many anticipated heading into the draft. Instead, Jimmy Butler was traded to the Timberwolves, and Danny Ainge drafted his favorite player of the draft class -- Jayson Tatum.

Tatum will join Jae Crowder, Al Horford and Jaylen Brown in the Celtics' front court after convincing the Celtics brass that he was the best player for their team. Ainge, who traded the No. 1 pick to the 76ers earlier this week in exchange for No. 3 and a future first-round pick, says Tatum has been their guy all along.


"Yes, we would have picked him with the first pick," Ainge confirmed after selecting Tatum at No. 3.

Boston's first-round pick even drew comparisons to franchise legend Paul Pierce before Thursday night and after seeing Ainge pass on No. 1 pick Markelle Fultz, it's fair to say expectations will be very high for Tatum in his rookie season.


"I think the biggest thing is that we really like Jayson," Celtics head coach Brad Stevens said. "We think Jayson can play a variety of positions with a variety of guys. I think that, in this kind of position-less league, those guys are really valuable."

The 6-foot-8 forward with a 7-foot wingspan, averaged 16.8 points and 7.3 rebounds for Duke last year. He adds another scorer to the Celtics roster -- one that can create his own offense with his ability to score off the dribble.


"I'm extremely excited to be joining such a great and tremendous franchise like the Celtics," Tatum said. They're a great team, they were the No. 1 seed in the East last year with so many great veteran players like Isaiah Thomas, Al Horford, Jae Crowder, Avery Bradley. Just so much I can learn from those guys."

Celtics also made three picks in the second round of the draft. C's drafted forward Semi Ojeleye at No. 37, Kadeem Allen at No. 53 and Jabari Bird at No. 56.