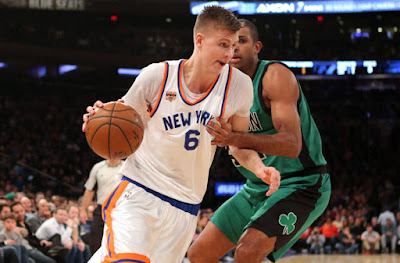 Knicks president Phil Jackson is reportedly listening to offers for Porzingis and according to the New York Daily News, the Celtics are interested.

Sources say the Knicks' young big man doesn't necessarily want to leave New York but after skipping his exit interview at the end of the regular season, it looks like Jackson is interested in finding out how valuable Porzingis really is.


Zinger, 22, has already made a name for himself as a 7-foot-3 scorer who can score from the outside and spread the floor. There's no telling what Jackson's asking price may be but if one had to guess a couple Celtics rotation players along with the No. 3 pick is probably a great place to start.

Boston certainly has enough currency to trade for a player like Prozingis but Danny Ainge and the Celtics probably have their eyes on polished veteran All-Stars, rather than young up-and-coming studs. But if the C's ultimately strikeout in trying to trade for a guy like Jimmy Butler or Paul George, or another All-Star of that magnitude, it wouldn't shock me to see Ainge focus on Porzingis.

Very few 7-footers can drain outside shots the way Porzingis can, and with Al Horford drawing pick-and-roll opportunities and Isaiah Thomas having all the room he needs to drive to the hoop, the youngster would fit in nicely. He's also a good shot-blocker -- a dying trend in NBA bigs now a days.