Celtics agree to trade No. 1 pick to 76ers 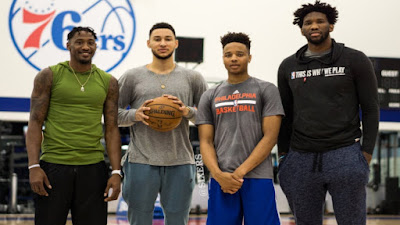 According to reports, the Celtics and 76ers came to an agreement on Saturday, and will swap first-round picks in Thursday's NBA Draft.

Boston will trade its No. 1 pick to Philadelphia in exchange for the No. 3 selection and Philly's future first-round pick in 2018 (via Lakers) or 2019 (via Kings). The 76ers are expected to draft Markelle Fultz Thursday night, and hosted a workout session with the projected top prospect on Saturday shortly before reports suggested that both sides agreed to the terms of the deal.

Trade between Philly and Boston will be finalized on Monday, per source. Sides have agreed. Sixers will get first pick and take Fultz.
— David Aldridge (@daldridgetnt) June 18, 2017

Fultz, who posed for photos alongside 76ers center Joel Embiid and 2016's No. 1 pick Ben Simmons, said he's looking forward to playing in the NBA and isn't paying much attention to the all the trade talk.


"I let God take care of it," Fultz said. "I wake up every morning and get ready to go to the gym. I don't really pay attention to everything that's going on. I'm truly blessed to be in this position. Whatever happens, I'm looking forward to taking my talents to wherever I go." [ESPN]

According to Boston Globe's Adam Himmelsbach, Celtics president of basketball operations Danny Ainge said that Kansas forward Josh Jackson, who many are predicting the Celtics will take at No. 3, hasn't agreed to workout for the Celtics yet.


"As of right now, we have not seen him," Ainge said. "We're trying to get to see him and [UCLA point guard] Lonzo Ball, two guys we haven't seen that we'd like to see, and so far they've chosen not to come in." [Boston Globe]

The trade is expected to be made official on Monday.